Nothing compares to a summer’s night at the speedway. The warmth of friendship in the grandstands and hot action on the track. Saturday, June 18th fans got a sneak preview of what lies in store as the INEX Ontario Legends joined the home track Battlefield Equipment Rental 4Fun, Paul Davis Systems Thunder Car and Earl Ireland Auto Sales Late Model divisions at Canada’s Toughest 3rd of a Mile Paved Oval.

the line. From the drop of the green flag, Tyson took control with Howie Crowe slipping into second. As the lead duo set a strong pace, there was an intense battle for positions deeper in the pack. The 20 lap affair ran caution free, with Tyson taking his first win of the year over Crowe. Pasinetti, Bailey Jacobs and Nick Oram completed the top 5. 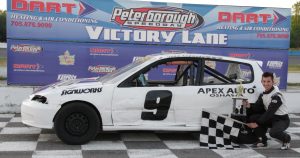 Sean Kennedy and Jake Kelly brought the Battlefield Equipment Rental 4Fun pack from the staging area to the Great Canadian RV green flag. The top 5 runners broke away early, with Kennedy catching the tail end of the field with just 6 laps showing on the scoreboard. With as much as a 10 car length advantage, the potent #9 machine took its first checkered flag of 2016 over Matthew Vanderbelt, Jeremy Kelly, Griffin Powell and Jake Kelly. Like the Thunder Cars, the 4Fun bunch went from green to checkered flag without a yellow.

With 30 laps on the agenda, Rick Spencer-Walt and Mike Wallace came on board with a hungry group of Earl Ireland Auto Sales Late Model machines

all looking to earn a trip to Dart Heating & Air Conditioning victory lane. From his inside front row starting spot, Spencer-Walt took control of the main event and not even a hat trick of caution flags would keep him from his second feature win of the year. Chris Mitchell, Andy Kamrath, Tyler Betts and Mark Gordon would finish-out the fast 5.

Robin Jongen and Kevin Foisy brought the 22 INEX Ontario Legends Series starters to the line to wrap-up the night’s action. From the drop of the 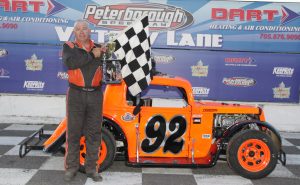 green flag, it was a spirited affair that saw the leaders enter lapped traffic with 11 laps complete. Matt Haufe would take the lead with 12 circuits down, only to relinquish the spot to Dave Riopelle a lap later. Riopelle held on for the win, with Haufe taking second. Nicholas Ledson rebounded from an early incident to finish 3rd, with Cole McFadden and Parker Traves chasing the lead trio to the checkers.

Bullring Bullet Points: Julie Bell of Ennismore doesn’t race, but still had a winning evening at track, taking the night’s 50/50 draw – in support of the Millbrook Lions Club – pocketing $516.50…An injury forced Bryan Sudsbury out of action, with former Autumn Colours Classic winner Andy Kamrath piloting his #29 Late Model…After running her first qualifying heat, the crew of Amanda Balson’s #16 Late Model found a hole in the oil pan and the car was loaded-up for the rest of the night…Larry Crowe Jr. won King of the Hill in his 2015 Dodge Challenger Hellcat.