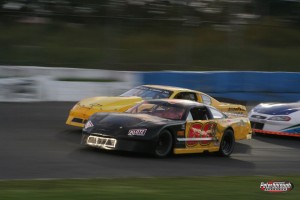 The chase for the Championship at Canada’s Fastest & Toughest 1/3rd Mile Oval started to heat up just like the weather as the season debut of open wheel racing took to the track with the Hurricane Midgets and the first race of their season.

In the Battlefield Equipment 4 Fun Division, Mike Gilbert (30) set his sites on leading the championship points by winning both his 1st heat as well as the feature race with an impressive lead in the points ahead of Bryan Hunt (22) and Billy Goddard (2).

The Bierworth racing family has started off strong in the Parry Springs Renegade Trucks as did Last year’s champion Andy McCann, but Rick Edgerton parked his #29 Parry Springs Sponsored truck in Victory lane, an impressive feat after the massive wreck in turn 4 two weeks ago.

The Hurricane Midgets returned with 18 cars, the same number as the cars they had for the 18th Annual Autumn Colours Classic – The Super-bowl of Canadian Short Track Racing. With half the field as rookie drivers, the sophomore driver #99 Adam Tyo pleased a fan gathering with an impressive victory despite a 20 Lap feature filled with cautions and two red flags due to accidents.

www.peterboroughspeedway.com  Late Models saw some new faces and a return or a 20 year veteran to Peterborough Speedway. The #66 normally driven by Larry Crowe Jr, had Jeff Bell in the drivers seat. Bell has always loved racing at Peterborough Speedway, the first track he ever raced in, but it has been since 2006 since he has seen victory lane. His team mate Howie Crowe (#77x) made his 2nd visit to victory lane winning Heat #4, but the storybook ending was Jeff Bell parking his Tall Teepee, Larry Crowe Sr Racing, Crowe Brothers Roofing Chevy in the winner’s circle, sending the Crowe brothers shooting up the points standings, and proving they are the team to beat!

The finish of the night was definitely the Peterborough Hyundai Mini Stock.  Daryl Fice (#44) led the race from the start, but at lap 28, with 2 laps to go, a caution caused by some lapped cars, but him in a battle for the win with last years points runner up; Mike Nelson in the NAPA, R&J Machine, Daryl Taylor Painting #85. On the restart Fice (44) tangled up with Junkin (41) and (9) Neil Hannah giving the chance for Nelson to take a quick jump and hold it for two laps as all three cars behind him chased him to the finish, Shooting Nelson to the top of the points with his second win in a row.