With the remnants of the full moon lurking behind a bank of clouds, a near capacity crowd was on-hand as Pepsi presented the final Double Toonie/Fan Appreciation Night of 2022 – Saturday, August 13th – at Peterborough Speedway.

The first main event of the night was a 20-lapper for the Battlefield Equipment Rental Bone Stocks that saw Ryan Oosterholt and Brad Lavalle bring the field to the green flag. Bone Stock drivers have logged some impressive laps year after year and this feature event was no exception. Taking the early lead in his borrowed ride, Oosterholt had a hungry pack of rivals on his back bumper as Lavalle and Jacob Kelly took a shot at the leader. While the race leader moved out to as much as a 7 car length advantage, spots were being swapped throughout the field. As slower traffic was being put a lap down, Oosterholt checked-out and scored another main event win. Lavalle, Kelly, invader Jacob Booth and Mark Griffin completed the top 5.

Chad Strawn and Rick Warnes took the green flag from the front row in the Ontario Modifieds Racing Series, presented by GEN-3 Electrical main event. After getting

off to a slow start because of an early caution flag, Strawn settled into a rhythm as the race leader, with Ben Gruntz, John Barker Jr. and Rob Richards fighting for positions. Baker Jr. mounted an attack on the runner-up spot and became Strawn’s principal contender as the leaders started working through slower traffic with a dozen laps on the scoreboard. The No. 77 team held off the late race charge from J.B.J. to take the win, with Ben Gruntz, Rob Richards and Alex Cuzzilla following the lead duo to the checkered flag.

The current point leaders in the division – James Townsend and Jacob Mercer – brought the Late Model field to the green flag for their 25 lap feature. Dan McHattie, who started inside the 2nd row and grabbed the runner-up spot from Mercer. An early yellow flag slowed the pace, with McHattie taking the lead on the restart. The latest incarnation of the home built No. 71 machine had a couple of early wins but has also experienced some growing pains. On this night, it was the dominant piece in the field as he broke away from the pack. Townsend had a strong run as well, but he was no match for McHattie who earned the checkered flag. Young hot shoe Jacob Mercer was 3rd, with Tim Batty and Bobby Cousineau completing the top 5. 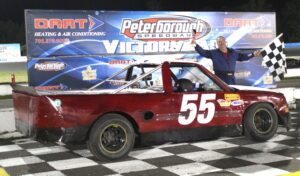 lead, with Desroches on his back bumper. Stacy Switzer was looking high and low, trying to steal the runner-up position, while also working hard to protect 3rd place from the challenge of Paul Boundy. A late race caution made a change in the running order but couldn’t keep Murray from victory lane. Switzer made it to 2nd, with Boundy 3rd. Bill O’Hara and Terry Hubbert were next across the stripe. 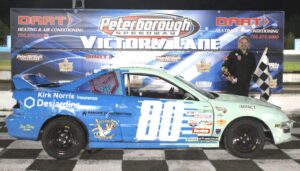 Ember Junkin and Brock Baker brought the 17 car Jiffy Lube Mini Stock starting field to the Great Canadian RV green flag. An early race yellow flag slowed the proceedings, with Junkin and John Lavalle leading on the restart. Jeremy Kelly – the current point leader and reigning track champion, who had started 8th – moved into 2nd place with only 5 laps on the board. Slower traffic came into play at the halfway mark, as did a lap 14 caution with Kelly taking advantage of every opportunity to take the checkered flag. Chris Tubman, Brock Baker, Lavalle and Rob Crick completed the top 5.

With some extra cash up for grabs, thanks to the team from Premier Portable Toilet Rentals, Keegan Moat picked-up the Kingsway Auto Centre Junior Late Model 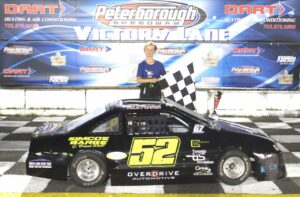 Bullring bullet points: Jason Tolton made the trek from Guelph, Ontario for a great night of racing and went home with a $1280.00 payday in the night’s 50/50…Kevin Strutt took the final bow of his 13 year racing career finishing 10th in the night’s Mini Stock feature…Several drivers made their first Peterborough Speedway starts of the 2022 season. Ethan Switzer climbed aboard the No. 77 Bone Stock for his first ever racing laps, Terry Hubbert added a Bone Stock ride to go along with his Renegade Truck package. Former Autumn Colours Classic winner Alex Lees was out with a new No. 7 Mini Stock, while Jacob Booth joined the Bone Stock ranks in his No. 26x…Multi-time track champion Ryan Oosterholt filled in for Steve Finnegan and Tegan Stanley welcomed a new sponsor – Lakeside Mobile Tire – to his No. 23 ride, ‘Rhonda the Honda’.

Action returns to Canada’s Toughest 3rd Mile Oval Saturday, August 20th with the inaugural running of the Ontario Modifieds Racing Series Bill Pickford Memorial event. Also on the docket will be the home track Bone Stock, Mini Stock, Super Stock and Late Model teams, with Kid’s Rides as the intermission feature. Pit gates open at 2:30, with the spectator grandstands unlocked at 5:00 and racing at 6:00.

Be sure to check www.peterboroughspeedway.com, as well as the track’s Facebook, Twitter and Instagram social media platforms for the latest news and information on the remaining dates of the 2022 regular season and details on the 29th running of the Autumn Colours Classic.