The promotional team at Peterborough Speedway has hit on a winning formula and the latest Double Toonie/Fan Appreciation Night – Saturday, July 2nd – was all the proof anyone would need. 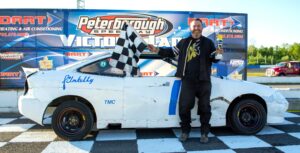 The night’s first feature event – a 20 lapper for the Jiffy Lube Mini Stocks – came to the line with Tyler Junkin, who was subbing for his sister Ember and John Lavalle on the front row. The No. 19 machine took an early lead, bringing reigning track champion Jeremy Kelly, Chris Tubman and Ryan Oosterholt – who was making his first start of the year – in tow. The race’s only yellow flag waved for an incident in the 2nd turn, with 4 laps showing on the scoreboard. Oosterholt moved into 3rd on the restart as the lead trio started working through the backmarkers with 7 laps complete. Oosterholt took over 2nd at the halfway mark, but that’s where his charge was stalled. Junkin held on for the victory, with Tubman, Kelly and Brock Baker chasing the lead duo to the line.

Stacy Switzer and Kyle Gordon led way as the Trent Lakes Complete Plumbing Renegade Truck teams came to the line for their feature event. For the first quarter of

the race, the duo ran side-by-side at nearly identical lap times before Gordon was able to break away with the lead. The 20 lap ‘A’ main ran caution-free, with Kyle Gordon claiming the win over Switzer. Shawn Murray, Paul Boundy and Jordan Desroches completed the top 5.

With new sponsorship from Kingsway Auto Centre, the Junior Late Models were a last minute addition to the Double 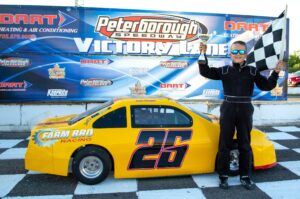 Toonie/Fan Appreciation Night line-up. A couple of new teams – Lucas Finnegan and Chase Stevenson – joined the class. Finnegan took the checkered flag in the lone heat race and also won the feature event over Stevenson, Kaiden Beatty and Lyla Sikma. The Junior Late Models will be back on the schedule Saturday, July 9th. 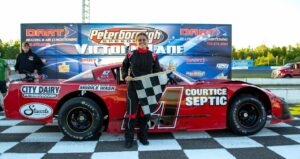 With just a few laps on the scoreboard, Owen, Paul Boundy and Brandon Feeney broke away from the pack, with last week’s main event winner Bailey Jacobs holding-down 4th spot. Feeney moved to 2nd after a lap 9 yellow flag, with Jacobs heading to 3rd. In the closing stages, it was becoming clear that it would be a girl’s night out as Marlie Owen held-off Jacobs for her first win of the year. Mark Gordon bounced back to finish 3rd, Feeney 4th and former track champion Donny Beatty – in his first Peterborough Speedway start of the year – 5th. Ironically, just a week ago the top 4 positions in the finishing order were the same, with Owen and Jacobs changing 1st and 2nd spots. 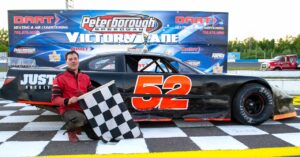 Late Model action was next to come, with James Townsend and Steve Powell on the front row. Shortly after the initial green flag, the field was put under red for a hard crash that saw Dan McHattie slam the front stretch wall. The driver was unhurt, but the No. 71 car was done for the night. Townsend resumed control of the field on the restart but another red flag, this time for a Tyler Junkin wreck when a lower ball joint snapped. Again, the driver was okay but his No. 41 machine was cradled off the track. Townsend picked-up his first win of the year, over Jacob Mercer and Powell. Junkin and McHattie were credited with 4th and 5th place in the order. 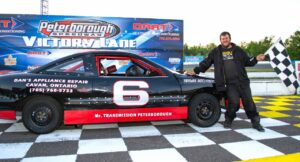 with Sean Kennedy running 2nd. There was plenty of action throughout the field as drivers ran high and low, swapping spots during the 20 lap distance. The pack had comers and goers, but Lavalle was in control from the drop of the green flag. Jake Kelly followed him to the checkered flag, with Steve Finnegan, Novis and Kennedy completing the top 5 finishing order.

Bullring bullet points: The night’s 50/50 draw produced a pit-side winner as Dave Kennedy – who’s son Sean drives the No. 9 Bone Stock – pocketed a payday of nearly $810…It was a rough night for a trio of racers in the Late Model class. Doug Wills had his No. 32 ride knocked out of the show after a wild ride on the backstretch wall, while Dan McHattie’s No. 71 was cradled from the track after a hard impact with the front stretch wall during the feature event. Tyler Junkin hit the retaining wall outside of turn 1, ending his night. All drivers were checked at the track and released by safety personnel…Mini Stock racer Kevin Strutt had his No. 34 t-boned during the feature race and announced in a Sunday morning social media post that he’s going to step away from racing after 13 years in the sport.

Next on the schedule is the Pure Country 105 Mid Season Bash, with the home track Bone Stock, Renegade Truck, Super Stock and Late Model divisions, plus the Canadian Legend Car Series, the return of the Junior Late Models and King of the Hill as the intermission feature. Pit gates open at 2:30, with the spectator grandstands unlocked at 5:00 and racing at 6:00.