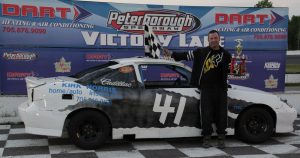 The night’s feature race action got underway with Jiffy Lube Mini Stock runners Ryan Carr and Steve McNevin on the front row. An early yellow flag for a 3 car incident slowed the pace, but it was pretty much smooth sailing from there. Last year’s track champion Tyler Junkin managed to hold off a challenge from opening night victor James Townsend to take his first win of the young season. Brandon Hannah, Carr and Donovan Price completed the top 5.

Peterborough Speedway start, Pasinetti led early but was freight trained by at least 5 others when she slipped out of the preferred lower line. Veteran Howie Crowe followed new leader Richards for several circuits, before taking the top spot and his first win of the year. Nick Oram, Like Gignac and Pasinetti chased Crowe and Richards across the line to round out the top 5 in the caution-free feature. 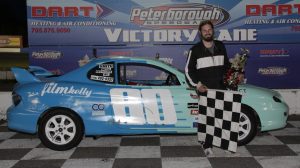 It was Jake Kelly and Carson Hennessy showing the way as the Battlefield Equipment Rental 4Fun teams came to the stripe. At the drop of the green flag, Jeremy Kelly slipped past the front row starters and took control. His #80 machine was the class of the field, leading by nearly half a straightaway before a yellow flag bunched the pack. The restart was short lived, as another caution slowed the pace. With Sean Kennedy, Ray Schroer, Matthew Vanderbelt and defending track champion Ryan Oosterholt on his tail, Kelly managed to record his first career win and celebrated with family, friends and his grandmother in victory lane.

Brian Woodland and Jody Bound brought the OSCAAR Midget field to the line for their 25 lap feature race, but Bound had the field covered. When a mid race yellow flag slowed his pace, the Uxbridge, Ontario racer had already lapped most of the field. When the green reappeared, he took off again 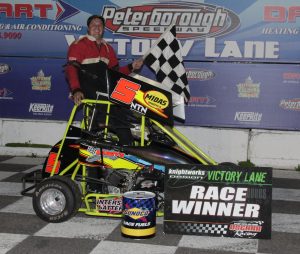 Bullring Bullet Points: The 50/50 prize of $444.00 went to Darrin Fice of Oshawa…Michael Shumilak made the long haul from Timmins, Ontario for his first ever Peterborough Speedway start. Mechanical issues sidelined the effort before he could run a Thunder Car heat.