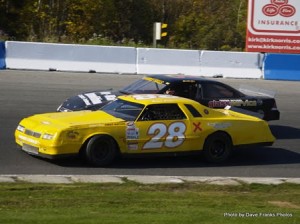 The Tec Tonic Open Wheel Modifieds make their sophmore visit to Canada’s Fastest & Toughest 1/3rd mile oval, with a battle between the #38 of Tyler Hendricks and the McLean racing team. At the end of the day it was Gary McLean (#8) in victory lane.

The Ontario Legends series were back at their home track with Andy Warbutton (#24) having the stamina to to hold off young Paul Pierk Jr (#27) and the statesman #4 of Bill Mason for the win.

In the Thunder Car invitational,  saw Dan Archibald (#07) try to catch the crowd pleaser #63 of John Baker Jr., But Jr. had what it took to park in victory lane for the second time in two nights.

The Peterborough Hyundai Mini Stocks had a battle all day long brewing between Tyler Junkin (41), Alex Lees (07), Neil Hannah (09), Daryl Fice (44) and Mike Nelson (85).  The Feature race was full of the attitude we’ve come to expect at Peterborough Speedway with Lees trying every trick in the racer’s (do not do) book, but he couldn’t get past the #41 of Tyler Junkin.

The Late Models had action all day long with a 30 lap feature race that had most of a #66 Crowe Bros Racing car with Jeff Bell at the wheel trying to make an impact on the dominance of his teamate car #88 driven by Kyle Donaldson. Normally driven by Howie Crowe who was racing his #28 Thunder car today, it was Donaldson in victory lane at the end of the day.

Finally in the King of the Hill the best time posted was the Red Honda CRX of Neil Hannah posting a winning time of 16.61, not far off his average lap time in the #09 Ministock car that he normally wheels around the track.

Next week is Fan Appreciation night with admission only $2 at the fan main entrance.