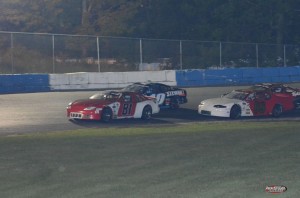 Mother nature was threatening thunder storms all day long, but the thunder of the Lucas Oil Sportsman was the real Storm at Peterborough Speedway.

The Night started off in the Battlefield Equipment 4Fun with Kevin Strutt #34 leading the points race coming into tonight ahead of Ember Junkin (#19). Strutt secured his lead with a feature victory tonight.

The Peterborough Hyundai Mini Stocks had the heated battle between #41 Tyler Junkin and Daryl Fice #44 with a little race rubing all night long with the Fice (Rock Star) #44 in the winner’s circle at the end of the feature.

In the Parry Springs Renegade Trucks, Rick Edgerton #29 came back from a DNF last week after blowing the engine in Heat #2 to take a victory at the end of the night tonight at the feature.

The Ontario Legend Series returned to theis home track to battle it out with the #29 two time series champion and newly wed Adam Cuthbertson returning after a two race absence, with a dominant performance during the qualifying heats, but at the end of the night, it was the wisdom of Matt Haufe (#7) as he followed the reigning champion thru the feature race and getting out in front when it counts; the finish who took home the win.

Then the night rumbled and roared with the 100 Lap feature of the Lucas Oil Sportsman Cup. The “Crowd Pleaser” Kelly Balson #10 started off on the pole position, but after getting spun by a lapped car 1/2 way thru the race, the #81 of Shawn McGlynn was out in front taking home his first win in two years.