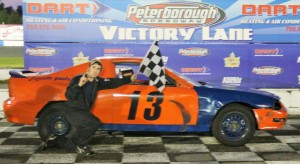 The Battlefield Equipment Rental 4Fun machines were the first division to hit the track for a feature event, with Dave Feeney and Griffin Powell on the front row. In just his second start of the season, Powell – a former Autumn Colours Classic champion – was the class of the field, as he took his first win of the year. Ryan Oosterholt logged a hard-fought second place finish, with James Townsend, Jeremy Kelly and last week’s feature winner Sean Kennedy chasing the lead duo to the checkered flag. 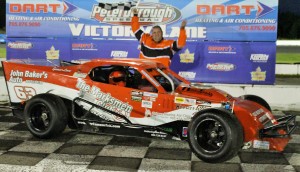 the way. Wagar was fast during the opening stages, but was no match for John Baker Jr., who took over the top spot with a handful of laps showing on the scoreboard. Donny Beatty – who is having a successful freshman campaign in the open-wheeled division – followed J.B.J. across the line. Nick Lees, Wagar and Cory Horner completed the fast 5 finishers. 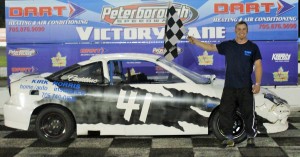 Price and Kevin Strutt – pacing the pack. As the lead pair broke away from the field, Tyler Junkin was hot on their tail and grabbed the top spot while working through lapped traffic near halfway. Junkin would earn another visit to Dart Heating & Air Conditioning Victory Lane, with Price and Strutt next. Dave Watchorn and Andy McCann rounded-out the top 5.

Defending track champion Ryan Kimball and Bryan Sudsbury led 20 Earl Ireland Auto Sales Late Models to the stripe for a 25 lap ‘A’ main. In a rough outing – with tempers as hot as the thermometer – Rick Walt became the latest driver to score his first win of

2015 in the division. Dave Morgan, Mark Gordon, Amanda Connolly and Tyler Betts followed the leader to the line.

Nicholas Ledson and Kevin Foisy brought the field to the green flag for the INEX Ontario Legends Series feature tilt that would close out the night’s action. Ledson got an early jump on his front row rival, as Dave Riopelle used an open door on the inside line to follow into the runner-up spot. After a restart for a debris caution, a huge wreck blocked the front straight and saw a number of cars knocked out of competition. All involved drivers were checked by track personnel at the scene and released. Even with a red flag delay to clear the scene, there was no denying Nicholas Ledson his first main event win of the year. Riopelle, Foisy, Cole Ledson and Jacob Sheridan followed across the stripe.

Bullring bullet points: An early rain shower caused track officials to cancel the on-track Fan Appreciation session, but a number of drivers delighted the crowd by handing out candy and signing autographs in the grandstand…The night’s 50/50 prize paid over $1,200.00 to a fan from Bracebridge, Ontario…More than a handful of drivers – including Bryan Mercer, Steve Munro, Darragh Moroney, A.J. Ehms and current Paul Davis Systems Thunder Car point leader Anthony DiBello – made their first starts of the year in the Earl Ireland Auto Sales Late Model field.

Action returns to the tight, tricky bullring on Mount Pleasant Road, west of the Liftlock City Saturday, August 22nd. The rescheduled Chase for the Colours pole qualifier will see teams in the Mini Stock, Paul Davis Systems Thunder Car and Earl Ireland Auto Sales Late Model divisions will run extra distance main events that will determine the front row starting spots for the 23rd Annual Autumn Colours Classic. Also on the program will be the home track Renegade Trucks and the Ontario Modifieds Racing Series. Pit gates will open at 1:00 with spectator grandstands unlocked at 4:00 and racing at 5:00.