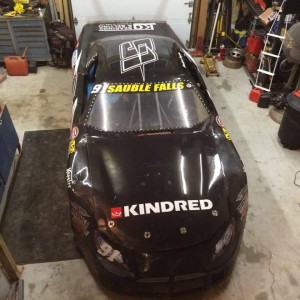 Peterborough Speedway got news last week, and we are proud to announce a new addition to our Late Model field for 2016. Shawn Stones will be wheeling the #51, a former Andre Pepin car. Shawn is not new to racing. He started drag racing at Milan Speedway and Grand Bend. In 2014 he moved from drag racing and tried his had at the oval in the Hurricane Midgets. At the end of the 2014 season he got into the Pro Challenge and ran both classes in 2015. When we asked him about sponsors the Pefferlaw resident said “I’m not 100% sure yet who’s sponsoring us this year, but chances are good we’ll have our sponsors back from last year that include Line X Newmarket, Marco Tools, MSR Motorsports. But mainly I run out of pocket.”

The competition will be tough for his rookie season at Canada’s Toughest 1/3 mile with rumors of people like Chris Mitchell, Bryan Sudsbury, Dave Morgan, Ryan Kimball competing. He’s up for the challenge though and in only a few short months we will be seeing him tearing up the oval!!!