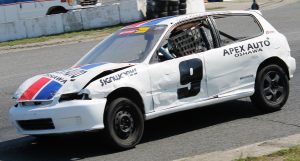 With 39 different teams taking a green flag at one time or another through the regular season, the Battlefield Equipment Rental 4Fun division at Peterborough Speedway is one of the most competitive anywhere in the province.

As the track’s entry level division rolled from the staging area to launch the schedule at Canada’s Toughest 3rd of a Mile Paved Oval, Sean Kennedy had his sights set on a string of strong, consistent runs to define his 2016 efforts. The 21 year-old from Courtice, Ontario – who had finished 2nd in the point standings a year earlier – was after a campaign that would at least mirror that performance, that also included a trio of main event checkered flags.

“There wasn’t much about our program that had changed from one year to the next,” said the young, confident wheel-twister. “The car looked and felt the same. We still put in the same amount of effort behind the scenes and at the track to find the results we were looking for. I was a year older and with that, came another year of experience. At this level of competition, that’s usually what it takes to get the job done.”

As the weekly results were tallied, top 5 and top 10 main event finishes were becoming commonplace for the driver of the hard-charging Honda. A number of qualifying event victories also helped him accumulate points toward a possible track title. While the highly competitive field may have limited him to a single feature race victory, Sean Kennedy says he entered the final event of the year exactly where he wanted to be.

“We started the Championship Clash – Saturday, September 3rd – second in points, within 19 markers of the leader,” said Kennedy. “That put a first championship season within our grasp, but there were a number of ‘what if’ scenarios that also came into play. It almost had to be a perfect night for us to walk away with the title and everyone knows that there are very few perfect nights in racing.”

Car counts for the night dictated that the class would be split into 3 qualifying groups, with each group running 2 rounds. While neither Kennedy or his championship rival picked-up a checkered flag, In the main event, the #9 machine finished 5th; while the point leader claimed the second spot to clinch the title, Sean Kennedy says that even though he wasn’t able to earn the title, it was still a great year.

“No one ever settles for second place, but we’ve finished there for a couple of years, so there is only rung left on the ladder,” said the driver with a smile. “We’ll start working on the car with a goal of showing some new colours for the 2017 season.”

Sean Kennedy would like to thank his parents Dave & Cheryl Kennedy, Rachel Bolton, Nancy Ohno, Jeff, Debbie & Cody Fenton and Andrew Massey; as well as sponsors Apex Auto – Oshawa, Signworks and Clarke Motorsports Communications for their support during the season. Fans can follow the team during the off-season by liking the skracing page at www.facebook.com.