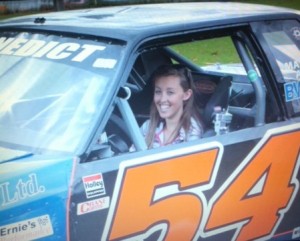 Short track racing has always been about catching a break. Being in the right spot at the right time to gain a position in the running order, or landing a ride instead of watching the action from the sidelines.

With Peterborough Speedway’s 23rd Annual Autumn Colours Classic – presented by Lucas Oil Products – on the horizon, Samantha Shaw will make the starting line-up in the Mini Stock edition APC Auto Parts Young Guns Showcase. The 20 year-old – who is attending the University of Waterloo and studying to be a veterinarian – will wheel Danny Benedict’s #54 Mustang in the inaugural spotlight event for drivers 21 or younger. Car owner and crew chief Doug Benedict says putting the former Sunset Speedway regular is a win-win situation for the team.

“While he’s eligible to run the event himself, Danny will be making the trek from Ottawa – where he’s attending classes at Algonquin College – late Friday afternoon and wouldn’t get much seat time,” said Benedict. “Sam has been one of the team’s biggest cheerleaders throughout the year and although she ran a limited schedule this season, she had a main event win in 2014 so we’re confident that she can get the job done.”

Benedict says Shaw will practice the car and provide feedback on whatever changes need to be made prior to the first round of qualifying for the Mini Stock division. In many ways, the chance to run the Young Guns Showcase will be a way to say ‘thanks’ for helping the team through a tight spot while their regular driver is in transit from the Nation’s Capital.

“Danny had a great season, finishing just outside of the top 5 in the final standings at Sunset, but it all started with an opening night feature win at Peterborough,” said Doug Benedict. “This has long been one of our favourite events on the schedule, so we’re hoping for a strong run and are happy to have Samantha’s help to get the car ready.”