Central Ontario race fans found the perfect way to welcome the summer of 2016. They spent it watching the edge of your seat action at Canada’s Toughest 3rd of a Mile Paved Oval. With the Jiffy Lube Mini Stock, Renegade Truck and Earl Ireland Auto Sales Late Model divisions joined by the Can Am TQ Midgets and INEX Ontario Legends, Saturday, June 25th was Autism Awareness Night at Peterborough Speedway.

Feature race headlines began with a 30 lap main event for the Earl Ireland Auto Sales Late Models as Chris Mitchell and Bryan Sudsbury brought the field to the Great Canadian RV green flag. The inside has long been the preferred racing line at the tight, tricky bullring on Mount Pleasant, west of the Liftlock City and Mitchell ran it to perfection in a caution-free feature for his first win of the year. The popular home-towner was followed across the line by Sudsbury, Tyler Betts, Ryan Kimball and Rick Spencer-Walt.

Cole McFadden and Matt Haufe brought the 18 car INEX Ontario Legends starting field to Canada’s Toughest 3rd of a Mile Paved Oval for their 25 lap feature tilt. Nick Ledson jumped out to an early lead, but hard contact with the front stretch wall between Cole Ledson and Cole McFadden brought proceedings to a halt. Both drivers were unhurt, but 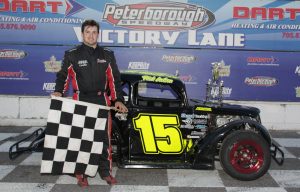 Ledson was finished for the night. Back under green, the multi-time series champion was in control of the field, until surrendering the lead to Kevin Foisy with 8 laps on the scoreboard. The pair caught the backmarkers with 11 circuits complete and on lap 22, the field went red again for a heavy wreck that saw Foisy’s ride get upside down on the back straight. Once the crash was cleared, Nick Ledson picked-up the win over Haufe, Dave Riopelle, Robin Jongen and Terry McClelland.

With 20 laps to settle the score, the Jiffy Lube Mini Stocks rolled from the staging area with Ember 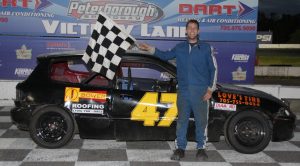 Junkin and Noel Snow on the front row. With just 3 laps on the board, a yellow flag for an incident exiting the second turn slowed the pace. Kevin Strutt took control of the event on the restart and was the lead dog in the hunt until Brandon Hannah slipped past with just a handful of laps remaining. Strutt would hang-on for second, with James Townsend, Neil Hannah and Snow following the lead duo to the line. 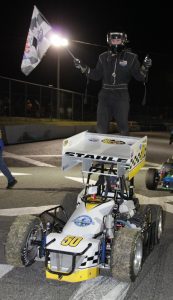 Steve Murdock and Adrian Stahle brought the Can Am TQ Midget pack to the green flag. A quick yellow – before there was even a single lap complete – slowed the pace and necessitated a repeat performance of the original start. While Murdock would slip back through the field, Stahle turned his early lead into a dominating effort until a lap 18 caution tightened the running order for a late charge. Nothing would keep Stahle from victory lane on the tour’s only Peterborough Speedway stop. Darren Dryden, Ryan Fraser, Mack DeMan and Rob Neely would round-out the top 5.

Bullring Bullet Points: Teresa McClelland of Renfrew, Ontario won $533.75 in the night’s 50/50 draw…Mini Stock driver Marilyn Junkin and Late Model runner Paul Pierik both celebrated birthdays on Saturday night. Junkin’s #61 was the only one of her family’s 3 car effort running at the end of the main event, while a workplace injury kept Pierik out of action…The Earl Ireland Auto Sales Late Model field was bolstered by the addition of Ryan Kimball, Steve Munro and Rob Warnes who all made their first starts of the year…Peterborough Speedway proudly welcomed Trent Lakes Complete Plumbing as the title sponsor of the Renegade Truck division for the balance of 2016 and all of 2017.