Feature race action got rolling with the Renegade Truck division, as Stacey and Stephen Bierworth brought the field to the Great Canadian RV green flag. What the class may have lacked in quantity, they made up for with quality as Chris Burrage and Jack Dallin waged a spirited battle at the front of the pack, racing each other clean and hard. Burrage grabbed the win, with Dallin on his tailgate. Doug Dallin and the father/daughter Bierworth duo completed the top 5.

The Battlefield Equipment Rental 4Fun field was next to roll from the staging area, as Ray Schroer and Connor Parkes brought the pack to the line. 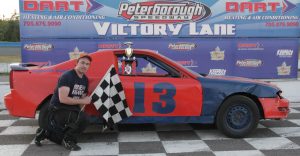 Griffin Powell would fight the leaders for the front spot, before taking the lead with 7 laps showing on the scoreboard. The #13 machine had nearly half a straightaway lead on his way to the win over Matthew Vanderbelt, Schroer, Colin Parkes and Shawn Soloman.

Jamie Riberdy and Cole Ledson paced the INEX Ontario Legends Series starting grid to the stripe for what would become an action-packed 25 lap affair. After an early yellow flag, Nicholas Ledson executed a patented top to bottom pass to take the lead, with Kevin Foisy on his tail. The #57 would grab the position heading into the 3rd turn on the 13th lap, but the pair spun between the 1st and 2nd turns. Foisy was sent to the back, while Ledson was parked because of rough driving by series officials. With 15 circuits complete, Matt Haufe put the on-track drama in his rear-view mirror and took a lead he wouldn’t relinquish. Foisy rebounded to finish 2nd, with Riberdy, Mike Getliffe and Robin Jongen rounding out the top 5. 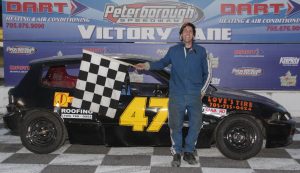 When it comes to putting on a show, the Jiffy Lube Mini Stock division at Peterborough Speedway gets the job done. Ember Junkin and Kevin Strutt brought the pack to the green flag, but Brandon Hannah grabbed an early lead and James Townsend came along to join the fun. The pair worked their way through lapped traffic to perfection in the caution-free event. Defending track champion Tyler Junkin was 3rd, with Strutt and Ember Junkin completing the top 5 spots in the running order.

As the Earl Ireland Auto Sales Late Model pack hit the track, officials were looking at an issue with the starting line-up. With Bryan Sudsbury and Ryan Kimball on the front row, there would need to be a change. Kimball had qualified the car, but Chris Mitchell was running the feature. The driver swap would move the #22 machine to the rear of the field and put Tyler Betts to the outside of the front 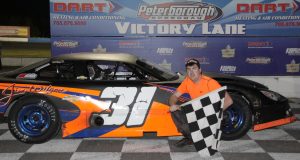 row. Betts took the lead early, with Rick Spencer-Walt slipping into second. The pair survived several caution flags and put on a show for the fans; swapping the lead back and forth, lap after lap. Even as the field took the checkered flag, the excitement wouldn’t dissipate. Spencer-Walt claimed the close win over Betts. Mitchell, Sudsbury and Mark Gordon were next across the line to finish the top 5.

Bullring bullet points: Ray Begbie of Oshawa left with $1159 in the night’s 50/50 draw…Peterborough’s Mike Wallace suffered engine troubles during practice. The team took the car back to their shop to swap power plants, but was unable to return for the Late Model main event…Rick Eades made hard contact with the front stretch wall during Ontario Legends warm-ups. Strong teamwork by his crew and others with the series allowed the #22 machine to get back into action…Drew Stieler’s #99 made its first start of the season with the Late Model field…The next Fan Appreciation/Toonie Spectator Grandstand Admission Night – presented by Pepsi – is scheduled for Saturday, July 9th.