The Harmony Creek Golf Centre on the outskirts of Oshawa was the setting – Saturday, November 12th – as the drivers and teams of the Ontario Modifieds Racing Series – powered by Torque Builders Inc. – gathered to celebrate another successful season of exciting open wheeled action.

The evening got underway with Richard Warnes addressing the crowd and thanking OMRS backers – including long-time series title sponsor Torque Builders Inc, Borque Transmission and Complete Mechanical – for their support. Warnes – who along with Randy Hollingsworth and Bill Pickford make-up the popular tour’s team of officials – reaffirmed the mandate of providing an affordable, competitive series for racers, by racers. To a round of applause by those in attendance, he also confirmed that talks were underway to return to Peterborough, Flamboro and Sunset Speedways in 2017.

Starting with Brad Stevenson and continuing through to season champion John Baker Jr., the top dozen point finishers for the year were brought forward to collect their accolades and point-fund payout. Individual awards were presented to Stu Robinson Jr., as the top first year runner in the division, while #46 ride – shared between Ryan Babin and Christopher Mulders – was named the most improved team. A special presentation was also made to Donna Brown, whose hard work behind the scenes and at the track keeps the series rolling throughout the year.

The Ontario Modifieds Racing Series has long considered itself as a development series for new racers and a few drivers from other divisions – including the 4Fun and Thunder Car classes at Peterborough Speedway and the go kart ranks – have made the transition to the popular open-wheeled machines over the years. For the 2017 campaign, several new teams are expected to compete in at least a limited role. At the award’s banquet, Connor James – who ran a partial schedule this year – was welcomed to the fold, along with Isaac Belyea who will make the step from the Kawartha Kart Club. Each driver – along with a handful of others – participated in the annual ‘Test a Mod’ day at Peterborough Speedway and will likely compete for the 2017 Rookie of the Year award.

OMRS will host a series meeting in the coming weeks to discuss rules, technical changes and other events as they pertain to the 2017 schedule. A date, time and agenda will be announced on the series’ Facebook group. 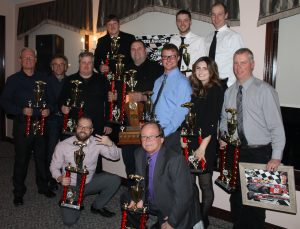