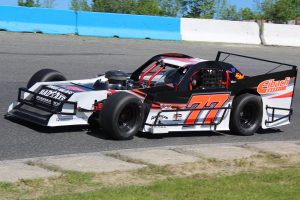 With a scheduled week off to fine-tune their equipment, the Ontario Modifieds Racing Series – powered by Torque Builders Inc. and Gen-3 Electrical – is ready to get back into action Saturday, July 13th – as part of the Country 105 Mid Season Bash – at Peterborough Speedway. Tour spokesperson Bill Pickford – who along with Rick Warnes and Randy Hollingsworth make-up the OMRS group of officials – says drivers and teams are looking forward to getting back to the series’ home track.

“It’s the place where many of our racers cut their teeth,” Bill Pickford said. “Drivers like Bob Franks, Craig Scott, Josh Gruntz and others have a ton of laps around Peterborough. Willow Barberstock won a track championship in what is now the Bone Stock division. And Alex Cuzzilla – who came from the karting ranks – picked-up his only stock car racing experience by running our ‘Test-a-Mod’ program.”