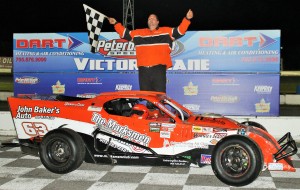 Race teams with the Ontario Modifieds Racing Series – powered by Torque Builders Inc. – have a full calendar, with 3 shows in 4 weekends at Peterborough Speedway this month. Saturday, July 11th the popular open wheeled tour came on close to 20 strong in front of a solid crowd during the Toonie Spectator Grandstand Admission/Fan Appreciation Night.

The 25 lap feature event for the Ontario Modifieds Racing Series came to the green flag with Corey Horner and Ryan Babin in control of the field.

While Alex Lees and Babin were the class of the field early in the run, things tightened-up through the rest of the running order when Donny Beatty and Ryan Dick combined to bring out the first yellow flag as the lap counter clicked-off 7 circuits complete. Just a couple of laps later, the first turn turned into a parking lot after Babin hit the retaining wall. Josh Gruntz needed to take evasive action down an escape route and the race was red flagged to check on the driver. Gruntz was checked by track medical personnel, while his heavily damaged #31 machine was towed back to the pit area.

Back under green, all eyes were on John Baker Jr., who moved into the lead on the 12th lap. Even a late race spin through the infield by Jamie Wagar and Gary Tryon’s contact with the second turn retaining wall couldn’t keep the crowd favourite and multi-time Thunder Car feature winner from collecting his second consecutive OMRS feature win over Brad Stevenson, Lees, Beatty and 2014 series champion Robert Warnes.

OMRS Peterborough Speedway notebook: Even with Dan Price and Duane Cinnamon – who ran the July 4th event missing this week’s show – OMRS still brought a solid line-up into the night…The popular open wheeled racing series will enjoy a much deserved weekend off Saturday, July 18th before putting the wraps on an exciting month at the tight, tricky bullring on Mount Pleasant Road west of the Liftlock City Saturday, July 25th.