Feature race action took the first Great Canadian RV Sales green flag of the night with a 15 lap affair for the Trent Lakes Complete Plumbing Renegade Trucks. Following an early yellow flag, Chris Burrage took the lead on the restart and the current point leader waged a patented torrid battle with defending track champion Jack Dallin over the entire race distance. Dallin was quick through the turns, but Burrage would regain the advantage on the straightaways on the way to another checkered flag. Stacy Bierworth, Doug Dallin and Brandon Vennor completed the top 5.

With 20 laps on the table, Bailey Jacobs and Nick Oram brought the Paul Davis Systems Thunder Car field from the staging area for their headline tilt.

Jacobs jumped to an early lead and had nearly a 3 car length advantage before Oram found his rhythm and began closing ranks. As the pair came off the 4th turn, the rear of Bailey’s machine broke loose for just a second, opening the door to Oram who looked to have taken the leader’s line, just as the caution flag waved. The youngster held off his challenger over the closing stages for his first career feature win. Howie Crowe was 3rd, followed by Rob Richards and Jessica Pasinetti to round-out the top 5.

Rick Spencer-Walt and Amanda Balson would lead the Earl Ireland Auto Sales Late Model pack to the stripe for their 30 lap ‘A’ main. With Spencer-Walt showing the fast way around, the top 3 broke out to an early advantage before a caution flag slowed the pace with just a pair of circuits on the scoreboard. While the #31W machine would maintain the lead on the restart, Balson lost a number of spots when she couldn’t get out of the high line. With lapped traffic between the leader and the rest of the field, the yellow flew again with just 5 laps remaining but that wouldn’t be enough to keep Rick Spencer-Walt from his latest trip to the winner’s circle. Tyler Betts, Chris Mitchell, Balson and Bryan Sudsbury were the next 4 to follow Spencer-Walt across the line.

With a girl power duo of Erin Kearns and Ember Junkin on the front row, the Jiffy Lube Mini Stock feature event was slowed by a caution flag as 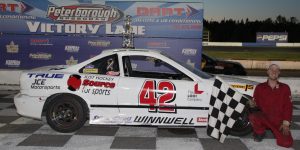 quickly as it had taken the initial green. James Townsend took the top spot on the restart and had caught-up with the rear of the field by the 9th lap. The race’s second yellow – with just over half the distance complete – would temporarily slow Townsend’s roll, but the #42 machine still made it to Dart Heating & Air Conditioning victory lane. Tyler Junkin, Tiffany Vanderbelt, Daryl Anthony and Ember Junkin rounded-out the fast 5.

There would be 25 laps to settle the score, as Alex Lees and Richard Warnes brought the Ontario Modifieds Racing Series starting field to the green flag. Lees would take the lead early, with Duane Cinnamon following along and the tour’s most recent winner Rob Warnes working the outside line. As Lees built-up a substantial advantage, slower traffic – also racing for position – came into play. Chris Burrows would take away the runner-up spot from Cinnamon, but when a late race yellow created a green, white, checkered finish all bets were off. Lees held on for the win, with Cinnamon and Burrows swapping spots again. Stu Robinson Jr. and John Baker Jr. completed the fast 5.

Bullring Bullet Points: The night’s 50/50 draw – in support of the Millbrook Legion – paid almost $410 to John Stewart of Kirkfield…Dan McHattie was scheduled to take a turn in the #66 Late Model, but the car experienced mechanical issues during practice. Luke Gignac put a new Thunder Car through its paces and Bracebridge, Ontario’s Leonard Johnston made his Peterborough Speedway debut in the Late Model division…The hot, humid conditions took their toll throughout the night, with a number of teams experiencing overheating issues.

Action at Canada’s Toughest 3rd of a Mile Paved Oval continues Saturday, July 30th with the Touring Division Chase for the Autumn Colours Classic pole qualifying event. Peterborough Speedway’s Battlefield Equipment Rental 4Fun and Jiffy Lube Mini Stock divisions will be joined by the OSCAAR Super Late Models, Modifieds, Midgets and Pro Midgets. Pit gates will open at 2:00, with the spectator grandstands unlocked at 4:00 and the first qualifying heat at 6:00.

Full schedule details – along with up to the minute news and results are always available at www.peterboroughspeedway.com, by liking the track on Facebook or following it on Twitter. You can also download the free Peterborough Speedway app on your Smartphone.