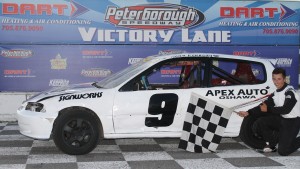 The night’s first feature event was a 20 lapper for the Battlefield Equipment Rental 4Fun teams, as Griffin Powell and Matthew Vanderbelt led the way to the Great Canadian RV green flag. Powell – who was making his first start of the season – jumped out to an early lead, with Jeremy Kelly looking to find his way around. A yellow flag for debris slowed the pace with 8 complete and after defending a 3-wide attack on the restart, Powell jumped out to almost a half-track’s advantage over his challengers. Sean Kennedy closed on the leader with 12 laps on the scoreboard and after trying the outside for nearly the entire race, it finally paid-off as he snatched his second win of the year at the stripe. Powell, Vanderbelt, Ryan Oosterholt and Marilyn Junkin finished out the fast 5.

With 20 laps on table, Dan Demers and Ember Junkin paced the Mini Stock field to the line. Brandon Hannah moved into the top 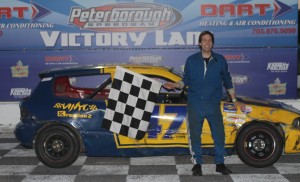 spot with a pair of circuits complete, with Donovan Price and Tyler Junkin following along. Back markers became an issue with just over a handful of laps in the record books, but nothing would keep Hannah from his first feature win of the season. Junkin and Price were second and third, while last week’s winner Kevin Strutt and Ryan Carr followed the lead trio across the line.

Newcomer Mike Meyer and Tom Podd brought the Paul Davis Systems Thunder Car pack from the staging area for their main event. Anthony DiBello continues to impress, as he motored the #16 machine into the lead just before the halfway mark. The division’s current point leader earned another trip to Dart Heating & Air Conditioning Victory Lane. 17 year-old Rookie of the Year candidate Bailey Jacobs was second, with Steve Mayhew, Dale Wood and Meyer rounding out the top 5. 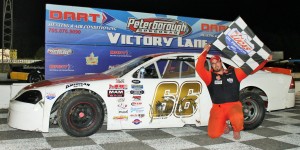 Bullring bullet points: After being rained-out Sunday, June 28th the Chase for the Colours event has been rescheduled for Saturday, August 22nd. Full details will be made available soon…For the first time in about a decade, Vintage Modifieds took to Canada’s Toughest 3rd of a Mile Paved Oval with an invitational event sanctioned by Kawartha Coupes and Coaches. Ben Charbonneau swept the night’s action, taking the qualifying heat and main event wins…It was a tough night for popular Alderville First Nation runner Howie Crowe as the #28 machine was heavily damaged after contact with the first turn wall.