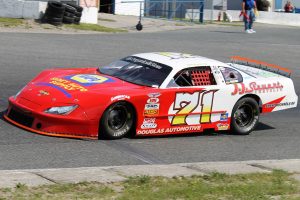 One of the most anticipated events on the 50th Anniversary schedule is about to take the green flag at Peterborough Speedway. Saturday, June 17th, the APC Pro Late Model Series is slated to make its 3rd appearance at Canada’s Toughest 3rd of a Mile Paved Oval, with support from the home track Battlefield Equipment Rental 4Fun, Thunder Car and Trent Lakes Complete Plumbing Renegade Truck divisions.

Former OSCAAR Super Late Model Series champion Brandon Watson holds the hot hand on the travelling road show, having taken the win at events run at Sunset and Flamboro Speedways so far this season. Despite Watson’s success, there will be a few familiar faces for fans of the tight, tricky bullring on Mount Pleasant Road, west of the Liftlock City to support.

Cavan, Ontario’s Dan McHattie is taking some time this week to convert his regular Saturday night ride over to the APC specs. He says he’s enjoying running the weekly shows in front of his family, friends and fans at Peterborough and looks forward to being in the line-up against some different competition this weekend. Chris Mitchell – who won the Autumn Colours Classic in 2011 – is focusing his efforts on the Pro Late Model tour this year and finished 10th and 11th respectively at Sunset and Flamboro. He says he’s working with a car that’s new to him and is still working to see what it wants.

In addition to McHattie and Mitchell, reigning Peterborough Speedway Late Model champion Rick Spencer-Walt has also run the first 2 shows on the Pro Late Model tour and is expected to compete during this weekend’s stop. Track owner and promoter J.P. Josiasse says its great news to have some of the venue’s top runners in the line-up for this special event.

“There have been so many talented racers come through our gates over the years, its great to see some of top Late Model teams signed-up for this event,” Josiasse said. “They’ve all been big winners during their events here and it would be quite possible to see one of them take the checkered flag Saturday night.”