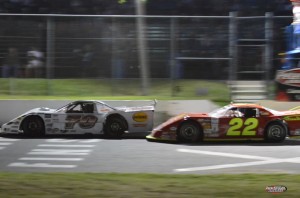 Another Amazing night of Racing at Canada’s Toughest & Fastest 1/3rd mile oval as the fastest cars in short track racing make their 1st of 3 stops at Peterborough Speedway.

The night kicked off with the Battlefield Equipment 4Fun Division saw the girl power of Ember Junkin battle it out with the points leader Kevin Strutt during the heats and come time for the feature the battle continued, but Strutt #34 dropped to the back of the field with engine trouble, with #19 Ember Junkin pulling off another impressive victory.

The Peterborough Hyundai Mini Stocks with some of the best drivers in the Ministock Class of Ontario calling Peterborough Speedway home. Tyler Junkin and Daryl Fice were battling it up front through out the night, but it was Alex Lees that pulled off the hat trick winning both heats as the Feature race.

The Late Model Division had the Crowe Brothers behind the wheel of both the #66 & The #88, but the fastest car on the track was tuned by the #14 (Jamie Horner) crew chief, helping to put the #66 of Larry Crowe Jr in Victory Lane.

The Lights came on for the 50 Lap feature of the OSCAAR Super Late Models.  The Feature race was full of excitement including a Red flag when #34 Al Thompson het the turn 4 wall hard. when racing continued it was a battle to the end between #70 Jeff Hanley & #22 Glen Watson. Hanley’s car was great on the short runs but started to get lose on the long green flag stretch, while Watson had a powerful car through the night. It the end it was #83 Ian Bourque in 3rd place, Glen Watson #22 in a close battle for 2nd and #70 Jeff Hanley taking home the hardware.