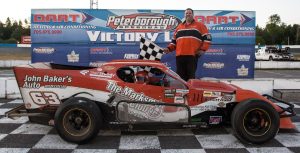 With a trio of events spread over this month’s 4 Saturday nights, the Ontario Modifieds Racing Series – powered by Torque Builders Inc. – is set to pack a lot of action into Peterborough Speedway’s Hot August Night Racing Series. Things got underway – Saturday, August 6th – with the 7th show of this year’s schedule.

Willow Barberstock and Rick Warnes brought the starting field to the line for 25 laps of open-wheeled excitement. Barberstock – a former 4Fun track champion at the venue known as Canada’s Toughest 3rd of a Mile Paved Oval – led the opening couple of laps before relinquishing the position to her grandfather, mentor and coach Randy Hollingsworth, who kept control of things ‘til just past the crossed flags that signified the halfway point in the main event.

As the lap counter clicked-off 14 complete, John Baker Jr., who – as the series point leader – had started at the rear of the pack, wrestled the lead away from Hollingsworth. Alex Lees – who collected a race win during the Saturday, July 23rd show – worked to get past Hollingsworth, to no avail. A lap after slipping-off the track in the second turn, the driver of the #07 machine headed for the infield pits and was done for the night.

There was no denying that Baker was the class of the field yet again, as the popular former Thunder Car star took his 5th win of the year. Hollingsworth was second, with Donny Beatty – subbing for Stu Robinson Jr. – Ryan Babin and Ryan Dick finishing-out the top 5. Brad Stevenson, Rick Warnes, Barberstock, Rob Warnes and Lees completed the running order.

Ontario Modifieds Racing Series notebook: John Baker Jr., Ryan Dick, Rob Warnes and Rick Warnes won qualifying heats earlier in the night…Chris Burrows had his #64B at the track, but didn’t make it into action. Newcomer Connor James was scheduled to make his first career start, but the debut was sidelined by mechanical issues.