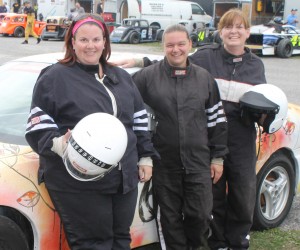 Short track stock car racing has traditionally been a male-dominated vocation. Over the years, a number of female drivers have made headlines in the various divisions at Peterborough Speedway. With the track’s spotlight event, the 23rd Annual Autumn Colours Classic – presented by Lucas Oil Products – less than a month away, the playground taunt ‘girls rule and boys drool’ could soon echo through the spectator grandstands and the pit area of the tight, tricky bullring on Mount Pleasant Road, west of the Liftlock City.

A quick check of the Battlefield Equipment Rental 4Fun point standings – where 15 year old Willow Barberstock captured the championship in 2014 – shows drivers named Ryan, Sean and Jeremy occupying the top 3 positions, but also runners who go by Tiffany, Marilyn and Erin within the top 20 positions of the finishing order. At last year’s Super Bowl of Stock Car Racing, half a dozen female racers were part of the overall starting fields. With the 2015 edition of the event coming up quickly, that statistic looks as though it could be repeated.

Fans can always find the latest Autumn Colours Classic news and information at www.peterboroughspeedway.com  by liking the track’s page at www.facebook.com or following it on Twitter. You can also download the free Peterborough Speedway app on your Smartphone.