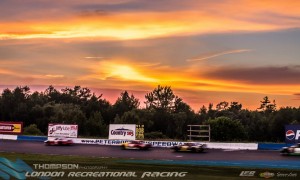 It was a chilly night, but the on-track action made-up for any lack of temperature – Friday, October 9th – at Peterborough Speedway as the 23rd Annual Autumn Colours Classic got underway with heat races for a number of divisions.

One of the biggest stories heading into this year’s Super Bowl of Stock Car Racing was the inaugural Young Guns Showcase events for rising stars in the Mini Stock and Thunder Car fields. Eleven Thunder Car pilots aged 25 or less and 16 Mini Stockers 21 or younger took the green flag in the opening round 20 lap features that saw drivers compete for a cash prize, bragging rights and a unique trophy. Lane Zardo, Matt Bentley and Chad Corcoran were the top 3 finishers in the Thunder Car event. Positions first through third in the Mini Stocks went to Brandon McFerran, Cayden Lapcevich and Chad Corcoran.

Bullring Bullet Points: Former Peterborough Speedway regular Andrew Swindells pocketed $263 in the night’s 50/50 draw…Ryan Babin – who is a former track champion – was involved in a crash while driving a borrowed Mini Stock ride on the opening lap of a qualifying heat…With temperatures expected to dip toward the minus 3 range, fans were thankful that the Friday night program at Canada’s Toughest 3rd of a Mile Paved Oval was an expedited affair, with only a few cautions and one red flag stoppage.

Fans can always find the latest Autumn Colours Classic news at www.peterboroughspeedway.com  by liking the track’s page at www.facebook.com or following it on Twitter. You can also download the free Peterborough Speedway app on your Smartphone.