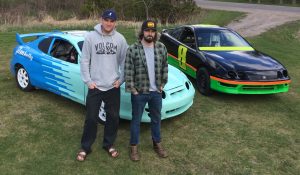 Al and Bobby Unser. Darrell and Michael Waltrip. Kurt and Kyle Busch. Whether performing professionally on the national stage, or entertaining family and friends as a hobby at the local speedway, brother combinations have long been a part of the motorsports community. In the Battlefield Equipment Rental 4Fun division at Peterborough Speedway, 29 year-old Jeremy Kelly and his 27 year-old brother Jake are carrying-on a family tradition at the same race track where their late grandfather raced in the 1960’s.

Like most brothers, they battle each other hard on the track but Jeremy Kelly, a Filmmaker and Jake, who works as an HVAC Labourer are both involved in racing to have fun and satisfy the adrenaline rush that comes with battling others on the track, learning about the sport and working on the cars to make them faster.

“I like being at the track and having some fun with a great bunch of people,” said Jeremy Kelly of Peterborough, who pilots the #80 Hyundai Tiburon. “At this level of competition, its an affordable side-line and a great time. I’ve always been into classic car restoration and being able to combine racing with my hobby is a bonus.”

“Passing cars myself and even getting passed by others has helped me a lot,” said Jake Kelly of Ennismore, who finished 14th in the standings and won a pair of qualifying heats in 2015. “I didn’t have any experience in the sport when I first got started, but being around the other drivers on a weekly basis has given me a real adrenaline rush and I’ve learned how to fine-tune the car from week-to-week.”

In the shop and at the racetrack, the brothers prepare and maintain their equipment with the help of crew chief Blair Kelly and pit boss Glen Harrington. For 2016, Jake Kelly – who enjoys snowmobiling, basketball and golf in his time away from the track – will campaign the #8 Acura Integra. The younger of the pair says he’s still looking for sponsorship for his team, while his brother will have support this year from FILMkelly, Co2 Solutions and Impact Communications.

Family is an important part of what the Kelly Brothers do on the race track. Jeremy Kelly – who won 3 qualifiers, finished 4th in points and had his machine named the 4Fun division’s best appearing car at Peterborough Speedway during the 2015 season – says his Dad, Mom and Step Dad are involved in the team’s efforts. Even their Grandma is at Canada’s Toughest 3rd of a Mile Paved Oval to watch the show every week.