Donovan Price and Ryan Carr brought the Mini Stock field to the Great Canadian RV Green Flag to kick-off feature race action. Price – who enjoyed a strong season that included his first Mini Stock feature win – was in control of things for much of the event, but James Townsend moved into second spot with 13 laps on the scoreboard. As lapped traffic came into play, others closed on the leader and Price was forced into the outside line. After technical inspection, the first 5 across the line were Townsend, Tyler Junkin, Price, Carr and Kevin Strutt. Unofficially, Tyler Junkin is the 2015 Mini Stock track champion.

Heading into their final feature event of the season, Jordan Dallin and his brother Jack – the defending track champion – paced the pack of pick-ups 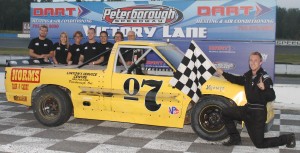 from the pits for the Renegade Truck ‘A’ main. The inside line got a jump on the field from the green flag, but the championship battle took a dramatic turn when Tim Burke, the truck division’s most recent feature winner was black flagged for a fuel leak. Jack Dallin held on for the race win and earned his second consecutive championship. Chris Burrage and Bill O’Hara Jr. followed Dallin across the stripe.

Sean Kennedy and Matthew Vanderbelt led the Battlefield Equipment Rental 4Fun teams to the line. With a starting grid of 23 drivers, there was action everywhere in the field. Vanderbelt used the outside line to get a jump on the pack and looked to be on his way to another checkered flag. A lap 15 yellow flag – when Jeremy Kelly got into the leader – could’ve moved both cars to the back but under 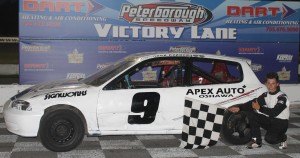 the gentleman’s rule, Kelly accepted responsibility for the incident and the #69 got his spot back. Kennedy would be next to challenge for the spot and grabbed the win. Vanderbelt, Tiffany Vandebelt, Ryan Oosterholt and Marilyn Junkin chased Kennedy to the line. With his 4th place finish, Oosterholt is unofficially the 4Fun champion.

With 25 laps on the table, Amanda Connolly and Mike Wallace were the front row starters for the Earl

Veteran Steve Mayhew and Rob Richards showed the Paul Davis Systems Thunder Car runners the way to the stripe for their final feature event of the regular season. With barely a lap on the scoreboard, the yellow flag flew when Richards was sent spinning after a hit from behind by Fidelle DiBello.

The driver of the #61 took the blame for the incident, giving Richards his position back for the restart. Luke Gignac overtook Mayhew for the top spot and never looked back. Tyler Liscum, Howie Crowe, Anthony DiBello and Bailey Jacobs followed Gignac to the line. Anthony DiBello clinched his second straight Thunder Car crown.

Corey Jones and Shane Gowan occupied the front row for the 50 lap OSCAAR Super Late Model feature event. J.R. Fitzpatrick was a man on the move, taking over 3rd spot with just a trio of laps complete. Lapped traffic came into the picture with 8 laps

down and the yellow flag waved for an incident between Gowan and Glenn Watson with 10 circuits on the board. Fitzpatrick was the star of the show, lapping all but the second place finisher for his first career OSCAAR main event win. Kevin Cornelius, Jones, Sean Grossman and Roy Passer rounded-out the top 5.

Action at Peterborough Speedway takes a break until the running of the 23rd Annual Autumn Colours Classic – presented by Lucas Oil Products – Friday, Saturday and Sunday, October 9th to 11th. The track will host an open practice session – Sunday, September 20th – starting at 11:00.