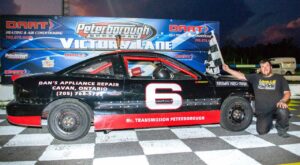 A regular season’s worth of racing was settled in one night during the 2022 running of the Championship Clash – Saturday, September 3rd – at Peterborough Speedway.

First to the line in the night’s feature event action was a 20-lapper for the Battlefield Equipment Rental Bone Stocks, with Brad Lavalle and Tegan Stanley on the front row. Lavalle took the early lead, with Sean Kennedy in tow. Jacob Kelly was having a strong run as the driver of the No. 8 machine started looking for the 3rd spot around lap 7 and took-over the runner-up spot from Kennedy with 11 laps on the scoreboard. The lead trio broke away from the pack as they encountered some slower with about 5 laps remaining. Try as he might, Kelly couldn’t get by Lavalle who held on for the win. Kennedy, Angelo Novis and Terry Hubbert completed the top 5 in the caution-free ‘A’ main.

Next action on the docket saw Paul Boundy and Stacy Switzer lead the Trent Lakes Complete Plumbing Bone Stock pack from the staging area for their feature tilt. 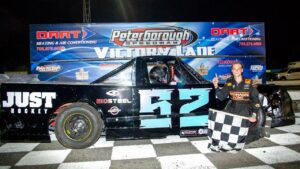 While the front row starters paced the pack, all eyes were on championship contender Kyle Gordon who had moved into 3rd and was challenging for the runner-up spot with less than a handful of laps on the scoreboard. Despite being frustrated by an incident during his heat race, Gordon took the lead with 11 laps complete and held the field at bay for a race win that saw last season’s rookie of the year named 2022 track champion. Boundy, Switzer, Shawn Murray and Jordan Desroches followed Gordon to the feature race checkered flag. 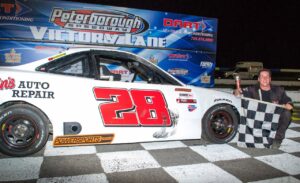 Todd Labadie and Rob Crick had the prime pieces of real estate as the front row starters in 20-lap Jiffy Lube Mini Stock feature. Chris Tubman grabbed the lead on lap 4, with Nolan Gould and John Lavalle next in the running order. Gould took the lead 4 turns prior to a lap 7 yellow flag but that didn’t change the event’s outcome. Wheeling a piece he said would work anywhere, Gould parked the No. 28 car – which also carried Ryan Babin to the winner’s circle with No. 89x on its doors – in victory lane. Tubman, Shawn Solomon, Ember and Tyler Junkin wrapped-up the top 5 finishers. 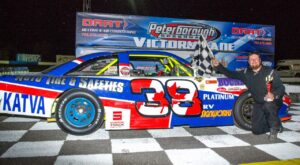 been up and down like a rollercoaster and for the Championship Clash, it was the ultimate thrill-ride. He and Jeremy Dobb both logged memorable performances in their best runs of the year. The driver of the No. 38 machine led every lap on the way to his first career Super Stock win. Dobb claimed the runner-up spot, with Marlie Owen, Bailey Jacobs and Mark Gordon completing the top 5 in the caution free feature. 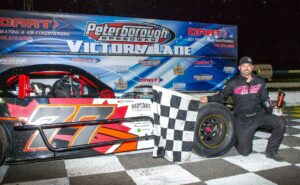 Randy Hollingsworth and Chad Strawn were on the front row as the Ontario Modifieds Racing Series, presented by GEN-3 Electrical teams came to the line for their 20 lap feature. Strawn took the lead, with Robert Maebrae, Rick Warnes and John Baker Jr. in close pursuit. An early yellow flag slowed the pace and brought the pack back together. Strawn held the lead on the restart, through a red flag and run around the backmarkers to score the win. Alex Cuzzilla claimed the series championship with his runner-up finish, while Shane Pollock, JBJ and Maebrae completed the top 5.

James Townsend and Bobby Cousineau held the front row starting spots for the 25-lap Late Model finale. At the drop of 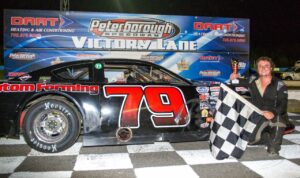 the green flag, Townsend was the race leader with young hot-shoe Jacob Mercer mirroring his every move. A pair of yellow flags brought the field back together and saw James Horner and Ryan Kimball move into 2nd and 3rd positions respectively, with 10 laps on the scoreboard. Horner took over the lead with just over a handful of laps remaining and scored the win. Kimball, Mercer, Cousineau and Townsend followed the No. 79 machine to the checkered flag. Townsend unofficially took the 2022 title with his 5th place finish.

Finishing positions for all divisions are unofficial, pending scoring review along with post race safety and technical inspection.

Bullring bullet points: Trevor Cook of Peterborough won the night’s $853.50 50/50 draw prize…Marlie Owen made her Late Model debut, wheeling a No. 18 machine. James Horner and former Autumn Colours Classic winner Ryan Kimball were back in action, running their No. 79 and No. 29 Late Models respectively. Kevin Strutt returned to Mini Stock action in his No. 34 Dodge Neon…A mechanical issue during practice sidelined the No. 52 of Late Model point leader James Townsend. Because neither car had turned a lap in qualifying, Tim Batty gave-up his ride in the No. 83 and Townsend ran it as No. 52.

Now that the 2022 regular season at Peterborough Speedway has concluded, plans are being made for the 29th running of the Autumn Colours Classic, presented by Lucas Oil Products coming-up October 7th through 9th. Advance tickets will be available online by the middle of September.

Be sure to keep checking www.peterboroughspeedway.com and the track’s Facebook, Twitter and Instagram social media profiles for the news and information from Canada’s Toughest 3rd Mile Oval.