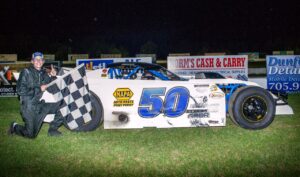 Randy Hollingsworth and Chad Strawn brought the starting field of OMRS teams to the green flag for the 20-lap main event. Strawn took the early lead from his outside front row starting spot, with Robert Maebrae, Rick Warnes and John Baker Jr. on his tail. The event’s first yellow flag, for an issue on the 3rd lap slowed the pace and brought everyone back together.

Strawn maintained his lead on the restart but now had Alex Cuzzilla and Shane Pollock looking for a position at the front of the pack. Not even a mid-race red flag or a run through slower traffic with about 5 laps remaining would keep the No. 77 team from another trip to the winner’s circle. Cuzzilla – the 2019 series rookie of the year – clinched this year’s OMRS championship with his runner-up finish. Pollock, Baker Jr. and Maebrae completed the top 5. Rick Warnes, Hollingsworth, Robert Warnes and Ben Gruntz rounded-out the finishing order.

Ontario Modifieds Racing Series officials would like to thank J.P. Josiasse and staff at Peterborough Speedway, as well as John and Frank Casale and the team at Flamboro Speedway for their continued support of the series.

Ontario Modifieds Racing Series Peterborough Speedway notes: The 2022 schedule was a memorable campaign for OMRS drivers and teams with the inaugural running of the Bill Pickford Memorial event…The season finale also featured a moving tribute to current runner Robert Maebrae. A former snowmobile and Thunder Car racer from nearby Millbrook, Ontario who had hoped to join the group in 2019 but was diagnosed with Terminal Cancer and ran only a single season. The September 3rd show was his final race. Teams joined the driver’s family and a large group of supporters for a pre-race photo shoot in victory lane…Tyler Bouillon had his No. 46 machine at the track but issues during practice sidelined his effort before the show started. In a show of sportsmanship, Robert Maebrae assigned the points he earned on the day to Bouillon. Ironically, the Maebrae team announced earlier in the day that their equipment had been sold to the No. 46 team.