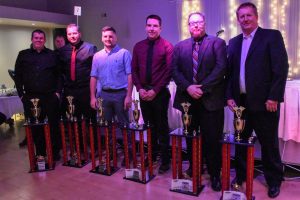 Drivers and teams from the Central Ontario venue commonly known as Canada’s Toughest 3rd of a Mile Paved Oval gathered at The Ranch Resort in Bethany Saturday, November 30th to celebrate a successful 2019 campaign at Peterborough Speedway.

Following a delicious meal, the evening continued as track owner and promoter J.P. Josiasse acknowledged the contribution of the facility’s sponsorship partners and staff, reflected on the strength of the past season, including another successful running of the annual Autumn Colours Classic and updated those in attendance on the plans for the upcoming 2020 schedule. Before presenting hardware to honour the success of the season, Josiasse announced that the Best Appearing Car awards in each division were in memory of Joann Blais, a photographer and good friend of the track who passed away during the season.

Point fund awards were presented, with Corey Strawn collecting the hardware for his championship in the Battlefield Equipment Rental Bone Stock division. Kyle Novis – driver of the #45 – was named the field’s most sportsmanlike driver, with Jack Hannah’s #27 once again taking best appearing car. Angelo Novis was dubbed the Bone Stock rookie of the year and the most improved driver.

In the Jiffy Lube Mini Stock field, Nolan Gould took the honours for his first place finish. The most sportsmanlike driver award went to Dan Demers. Jeremy Kelly had his #80 machine voted best appearing car and was also named rookie of the year. Dylan Wills – who finished 14th in the overall standings – earned the most improved driver award.

Nicholas Ledson and Brad Lavalle shared the hardware for the championship season in the Trent Lakes Complete Plumbing Renegade Truck field. Terri-Anne Whittern was tabbed as 2019 most sportsmanlike driver. Michael Feeney took the class best appearing truck and rookie of the year awards. Most improved driver honours went to the #29 of Alex McGibbon.

Dan McHattie was once again named the Late Model track champion. In memory of Terry Calvert, McHattie was also voted by others in the field as the most sportsmanlike driver. Tyler Junkin was named rookie of the year. McHattie’s #71 was picked as the best appearing car, while Kyle Batty took the most improved driver honours.