There are so many choices for your entertainment dollar, but there’s no better value for your motorsport’s investment than the Toonie Spectator Grandstand Admission/Fan Appreciation Night – presented by Pepsi – at Peterborough Speedway. It may have happened a week later than expected, but Canada’s Toughest 3rd of a Mile Paved Oval hosted another event in this year’s Hot August Nights Racing Series – Saturday, August 20th – with the Battlefield Equipment Rental 4Fun, Paul Davis Systems Thunder Car, Earl Ireland Auto Sales Late Model, INEX Ontario Legends, Ontario Pro Challenge and Ontario Modifieds Racing Series divisions, with tickets at just $2.00 each. 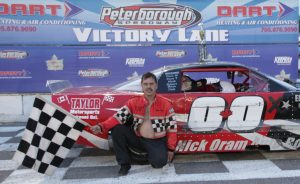 Main event action got underway with a 20 lapper for the Paul Davis Systems Thunder Cars, as Nick Oram and Kyle Donaldson brought the pack to the line. The pace was slowed early for a lap 3 yellow flag that saw the #14 of Steve Mayhew bounced off the front stretch wall. While the driver was unhurt, he was finished for the night. Oram and Donaldson ran nose to tail throughout the race distance, with Bailey Jacobs – who had won the last 2 feature races – closing ranks. Donny Beatty – in the #15 of Rob Richards and Jessica Pasinetti chased the lead trio to checkered flag to complete the top 5.

The Battlefield Equipment Rental 4Fun teams were next for a thrilling feature tilt that saw action at every turn. Front row starters Keith Parkes and

Mitch Cook brought the field from the staging area for an event that despite the huge field, saw only one yellow flag. Defending track champion Ryan Oosterholt – who had come from near the middle of the pack – used a good handing car to grab the lead with 12 laps on the scoreboard and gained a 10 car length lead as he worked through lapped traffic. Parkes would hang-on for second, with Malcolm ‘Pops’ MacDonald, Sean Kennedy and Ray Schroer rounding-out the fast 5. 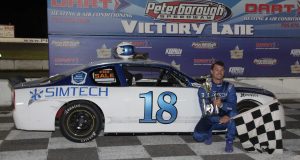 For the first time in nearly a decade, the Ontario Pro Challenge came to Canada’s Toughest 3rd of a Mile Paved Oval with an exciting 25 lap headliner on the agenda. Dario Valente and Kevin Crowhurst led the way, with Crowhurst assuming the top spot before surrendering the position to Valente just 2 laps later. Proceedings were brought to a halt with 9 circuits complete. Tim Batty lost an engine in the #38 machine and the trail of oil he left behind caused several others to spin. A small fire under the hood sent track safety and clean-up teams to Batty’s car and while the driver was unhurt, he couldn’t continue the race. Patrick Freel moved into the top spot on lap 15 and would lead the rest of the way. Tim Norris, Bryan Stevanus, Valente and Ken Lillycrop would complete the top 5.

With 30 laps to settle the score and Mark Gordon and Chris Mitchell on the front row, the Earl Ireland Auto Sales Late Models came to the green flag nearly 20 strong. Gordon took an early lead, but the paced was slowed for an incident in the second turn with 6 laps complete. Action resumed with Gordon still in control, but Mitchell hot on his tail. The top 5 in the running order would break away from the pack, until a lap 18 red flag stopped the charge. Over the closing stages, Gordon maintained his quick pace for another trip to victory lane. Mitchell, Amanda Balson, Tyler Betts and Rick Spencer-Walt occupied the balance of the top that chased winner across the line.

Willow Barberstock and Rick Warnes led a dozen Ontario Modifieds Racing Series machines to the line for their 25 lapper. Barberstock paced the

opening stages, before a lap 3 yellow flag slowed the pace. Rob Warnes – who had come from 4th on the initial green flag – took the lead from his father on the restart and was able to build nearly half a track’s advantage as the rest of the field battled for position. Warnes caught the backmarkers with about 20 laps on the board, on the way to his 2nd win of the year. Stu Robinson Jr., John Baker Jr., Christopher Mulders and Cory Horner completed the top 5. 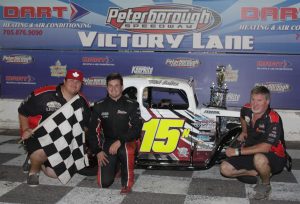 Matt Haufe and Terry McClelland brought the INEX Ontario Legends to the tight, tricky bullring on Mount Pleasant Road, west of the Liftlock City for a 25 lap tilt that would close-out the night’s action. Haufe grabbed a quick advantage over Nick and Cole Ledson before a yellow flag with just 2 laps on the board. Another pair of yellow flags slowed the pace, but green flag conditions would be the order of the day after a lap 8 restart. With the Ledson brothers in control, the leaders caught the back of the field with 16 laps down. Three-time series champion Nicholas Ledson would take the win over his sibling. Haufe, McClelland and Bill Mason were the rest of the top 5. The INEX Ontario Legends finishing order is unofficial, pending technical inspection.

Bullring Bullet Points: With a strong crowd in attendance, the 50/50 draw – in support of the Millbrook Lions Club – paid more than $967 to Kathy McCabe of Lindsay, Ontario…With 6 classes in action – including 30 teams in the 4Fun divisions – the pit area was so full that about a handful of teams were required to park just outside the main gates…Concerns with a storm system moving into the area caused track officials to cancel the scheduled Fan Appreciation autograph session. Several drivers worked their way through the grandstands to meet with fans.