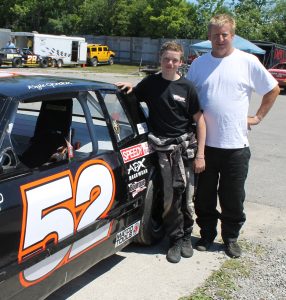 Whether they’ve chosen to follow in the footsteps of a successful parent or sibling, or made the move in pursuit of their own interests a group of young racers has elected to join the weekly wars at Canada’s Toughest 3rd of a Mile Paved Oval. As the opening night of its 50th Anniversary Season grows closer, Peterborough Speedway is looking toward the future by honouring a page of its rich racing history.

19 year-old Bailey Jacobs and 21 year-old Sean Kennedy are about to enter their 3rd season of action at the tight, tricky bullring on Mount Pleasant Road, west of the Liftlock City. After graduating from the karting ranks, Jacobs finished 2nd in the 2016 Paul Davis Systems Thunder Car standings, while Kennedy was last year’s runner-up in the Battlefield Equipment Rental 4Fun point chase. On the other side of the coin, Brandon Vennor – a 23 year-old – made his first starts in the Trent Lakes Complete Plumbing Renegade Truck division and was 6th in the final standings. 16 year-old Kyle Gordon set the same standard in the Thunder Car field and was 7th overall. Neither driver had any previous racing experience, but learned their craft with the help of supportive family members. Track owner and promoter J.P. Josiasse says there have been several drivers who’ve followed the same path over the years.

“While some people their age spend time playing soccer or softball, Peterborough Speedway has long been the place for young drivers to hone their skills,” said Josiasse. “Derek Lynch grew-up watching his father at the track and started his career at what was then known as Westgate Speedway in 1986 at the age of 14. He was named rookie of the year in the Late Model Sportsman class that season and won the track championship a year later. His career would eventually take the Norwood, Ontario native to the former NASCAR Busch North Series and victory lane in what is now the NASCAR Pinty’s Series. Lynch also earned the pole position during our 2016 APC Pro Late Model event.”

Stirling, Ontario’s Willow Barberstock made her first ever start at the Autumn Colours Classic when she was just 12 years old and concluded her time in the Battlefield Equipment Rental 4Fun division by earning the track championship. The popular youngster – who has become a favourite with the fans – will kick-off 2017 with her 3rd season with the Ontario Modifieds Racing Series

Even with the plans to mark the 50th Anniversary of the speedway, the official schedule won’t be released until the annual Motorama Custom Car and Motorsports Expo – March 10th through 12th – at the International Centre in Toronto. They’ll also be part of special events that will include displays at the Peterborough Home, Cottage and Country Show – March 31st to April 2nd – at the Evinrude Centre and at the Lindsay Square Mall, April 23rd through 30th. Fans have come to expect participation at the pre-season events and several drivers and teams are lined-up to show-off their new colours.”

Bullring bullet points: Keep on top of all the 50th Anniversary news at Canada’s Toughest 3rd of a Mile Paved Oval by logging onto www.peterboroughspeedway.com, liking the track on Facebook or following it on Twitter. Fans can also download the free Peterborough Speedway app on your Smartphone.