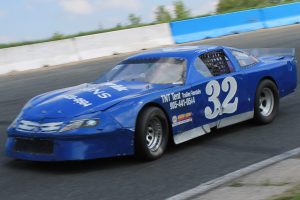 One of the most anticipated events of this year’s edition of the Autumn Colours Classic – presented by Lucas Oil Products – is the inaugural running of the Electric City 167. The combined Limited Late Model/Pro Late Model feature tilt is seen by many as the highlight of the 26th annual season ending spectacular. Track owner/promoter J.P. Josiasse says putting the 2 divisions together for a marquee affair makes good racing sense.

“These classes have become very similar over the last few years and we decided to give the fans an extra special race this year,” said Josiasse. “It’ll be a great show that the motorsports community has been talking about since we made the initial announcement a couple of weeks before the 2018 schedule was released.”

There’s no mistaking the value of experience when it comes to racing at the weekly short track level. Few teams are able to draw from a background of knowledge similar to the one available to the #32 Peterborough Speedway Late Model team of Wills Racing. A fixture in the sport at several different venues for 3 generations, driver Doug Wills from Orono, Ontario is grateful for the help and support in the form of used tires and parts he receives from some of the other drivers. He says he knows he can count on the effort his family-owned team brings to the track for every race.

“We might not have the same operating budget as some of the others in the pit area, but at this level everyone gets to play,” said Doug Wills. “My father Eric has been around the sport in one form or another since 1961 and he’s shared what he knows about stock car racing with me and I’ve been able to pass along that same level of commitment to hard work and dedication to my son Dylan to keep our team rolling over the years.”

Pit gates open at 10:00, with spectator grandstands unlocked at 5:00 and racing getting underway at 6:00. For full schedule information and the latest Autumn Colours Classic news, see www.peterboroughspeedway.com, as well as the track’s Facebook or Twitter social media platforms. There is also a free Peterborough Speedway app available for Smartphone users.