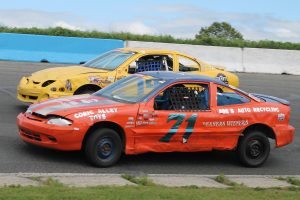 The year’s first green flag waved Saturday, May 20th to kick-off Peterborough Speedway’s 50th Anniversary Season and since then, teams in the track’s 5 weekly classes have been earning points that will count toward the 2017 track championships. The second-to-last night of racing in the regular season leaves the starting blocks Saturday, August 26th with action in the hometown Battlefield Equipment Rental 4Fun, Thunder Car and Organics & Glass Late Model divisions; along with the Trailers Plus Eastern Ontario Legends and Ontario Modifieds Racing Series.

Across the board, drivers will be out to make a difference in their finishing positions when the final point standings are tallied. Everyone would love to earn the overall title in their respective class, but there isn’t a single team in the pit area that doesn’t want to finish at least one position higher than where they sit heading into the last 2 nights of racing. Peterborough Speedway owner and promoter J.P. Josiasse says the battles are tighter than they’ve been in a number of seasons.

“A couple of spots gained on the track could change the outcome of as many as 5 positions in a division,” Josiasse said. “Night after night and week after week, we’ve seen some incredibly close runs. Last week, the top 2 teams in the Late Model field enter the night with a difference of a single point between them. There’s a good chance that things might not be settled until the final checkered flag of the Championship Clash Saturday, September 2nd.”

Josiasse says he doesn’t think the championships in any of the weekly classes at Canada’s Toughest 3rd of a Mile Paved Oval is a sure thing, so fans are guaranteed to see some exciting racing, with every driver making sure their equipment is ready for anything that can happen. For the Saturday, August 26th event, pit gates will open at 3:00 with the general admission grandstands unlocked at 5:00. The night’s first Great Canadian RV green flag will fly at 6:00.