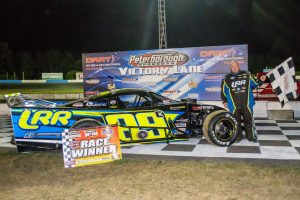 With only 5 events remaining in the 2019 regular season, this year’s edition of the Hot August Nights Racing Series kicked-off – Saturday, August 3rd – at the tight, tricky bullring on Mount Pleasant Road. Hometown Bone Stock, Mini Stock and Super Stock teams found out that the talking stops when the green flag drops as they took the first step toward the track championship. Also on the schedule as the track rolled-out a new month of action were the OSCAAR Modified and Pro Sprint divisions.

Feature race action got rolling with a 20 lapper for the Battlefield Equipment Rental Bone Stocks, with 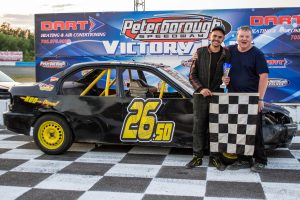 Kyle Novis and Kyle Hope on the front row. Novis led the opening laps but defending track champion Ryan Oosterholt took control after a lap 3 restart. The Bone Stock field always gives fans plenty of action and the night’s opening main event was no exception. Kris Khan was looking for the lead near the halfway mark and made the pass as the leaders started to work through slower traffic with 17 laps on the board. A final yellow – for a 2nd turn crash – meant a green, white, checkered flag finish. Oosterholt regained the lead and held-off Novis, Corey Strawn, Hope and Chris Tubman for another trip to victory lane. 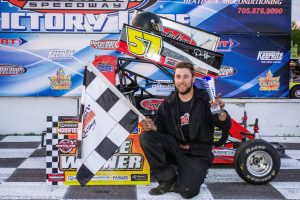 Tyler Cullen and Paul Stanley brought the OSCAAR Pro Sprint field to the Great Canadian RV green flag. James Stanley grabbed the lead early and built-up a strong advantage over Daniel Hawn. The 25 lapper had action all around the track, as the pack worked high and low through traffic at every turn. Running from green flag to checkered without a yellow made for an interesting night for track officials, who worked through the line-up to determine the final finishing order. James Stanley took the win over Daniel Hawn, with Cullen, Rob Summers and Paul Stanley next to cross the line. 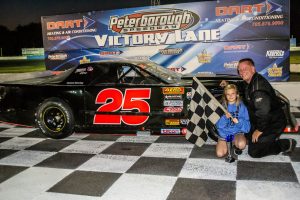 Motor Speedway on the line, Tim Burke and Kyle Gordon paced the KOD Disposal Super Stock pack to the line for 30 laps of excitement. Burke took the early and survived a lap 7 caution flag for a front stretch incident. Marlie Owen took over the runner-up spot on the restart, but Burke took off again and built-up more than a 10 car length advantage, while Owen and Mark Gordon fought for 2nd. A debris caution with just 8 laps remaining slowed the pace and made it a brand new race. Mark Gordon took the lead and held on for the win. Burke, Tyler Bouillon, Howie Crowe and Owen followed the winner across the stripe. 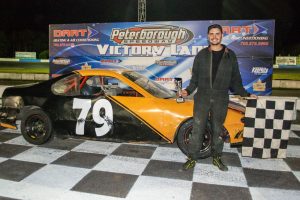 Marilyn Junkin and Dwight Lavoie led the way as the Jiffy Lube Mini Stocks hit the track for their 20 lap main event. An early yellow flag – with just a pair of laps on the board – changed the running order. Gil Brooks took the lead on the 4th lap, with reigning track champion Ryan Oosterholt taking over a lap later. Lapped traffic came into play around the halfway mark, but nothing could derail Oosterholt. Nolan Gould got close at the checkered flag, with Jassen Whyte, Tiffany Vandebelt and Chris Novis rounding-out the top 5.

OSCAAR Modified teams made their only regular season Peterborough Speedway appearance with a 40 lap feature that had Brad Pearsall and Norman Newman on the front row. Pearsall took the lead early and had Kelly Balson on his back bumper. The #15 machine and the rest of the field caught the back of the pack with close to a dozen laps complete. It looked like Pearsall had things well in control. Just about the time tour officials thought the Mod Squad might run its 2nd straight caution-free feature, everything changed with about 35 laps on the scoreboard. Following the event’s only yellow flag, Shawn Chenoweth – who had been running 3rd – stole the lead from Pearsall and held on for the win. Anthony DiBello also got around Pearsall, with Newman and Balson completing the top 5.

Bullring bullet points: Bill Rogers of Douro-Dummer pocketed $470.75 in the night’s 50/50 draw…Ethan Schoep – a regular in the Comp4 field at Brighton – made his Peterborough Speedway debut in the Mini Stock ranks, while Paul Kuleba was a first-timer in the Bone Stock division…Dave Middel took a turn in James Townsend’s #45 Mini Stock, while Ryan Oosterholt picked-up a ride in the #26 Bone Stock. After having Tony Tiemersma and Tyler Betts in the car in recent weeks, former track champion Howie Crowe returned to the controls of his #28 Super Stock ride.

Your 24/7/365 source for track news and information is www.peterboroughspeedway.com. The track is also very social media savvy, with interesting and informative posts on Facebook or Twitter. Search for ‘Peterborough Speedway’ for a free, appetizing look at weekly short track racing in Central Ontario.