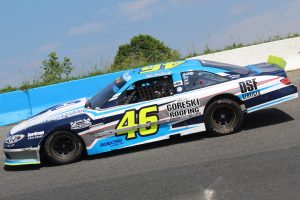 “I think it’ll be a great year and I can’t wait to get back to the track.”

Tyler Bouillon is finding it hard to hide his enthusiasm for Peterborough Speedway’s upcoming season. With the Saturday, May 16th arrival of the new season, the 19-year-old racer from Burketon, Ontario will be starting his 4th year in the highly competitive KOD Disposal Super Stock division and after finishing 10th in the final 2019 point standings, he’s counting the days until the calendar’s initial green flag.

“Going to the track every weekend is like a vacation,” said the driver who was named the Super Stock division’s Most Improved Driver in 2017. “I can’t thank my family enough for all their support. My Mom Tracey and my sister Sydney are always great at encouraging me and putting-up with racecar talk almost 24 hours a day around the house. I’ve made some good friends through every stage of my racing career and without them, I wouldn’t be anywhere even close to where I am today.”

While he has yet to add a stock car racing main event checkered flag to his resume, Tyler Bouillon’s career karting statistics indicate he’s quite familiar with the process. In Briggs & Stratton Junior ranks, he was 1st at the 2013 Wasaga Grand Prix, won the Mosport championship and netted 2nd and 3rd place during the 2014 Florida Winter Tour. It was the performance of another successful racer that eventually led to the young hard charger’s choice of numbers for his own equipment.

“When I was younger, my Dad took me to Mosport Speedway every Saturday night to watch our friend Darren Kearnan,” said Bouillon, who works as a millwright apprentice. “Darren’s Open Wheel Modified always carried #46 and I was his biggest fan. A couple of years later, I started my career in karting and the rest is history.”

Tyler Bouillon says that without the tireless effort, unwavering support, dedication and commitment of his father fueling his passion for the sport, the young team wouldn’t have already scored more than a handful of heat race wins and be in position to contend for an initial feature race checkered flag and the overall season title. Jamey Bouillon and family friend Jeff Fenton put in some long hours behind the scenes and at the track, doing their best to keep the car in the heart of Peterborough Speedway’s weekly wars.

The team is very active on social media and invites friends, fans and potential backers to like the www.facebook.com/Tysyd-Motorsports page and catch them in action at Peterborough Speedway throughout the 2020 season. Contact the driver tylerbouillon@gmail.com to explore exciting opportunities with Tysyd Motorsports.