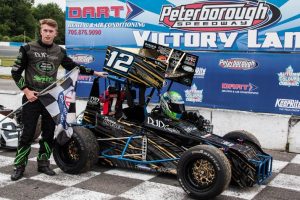 With rain showers all around the area and on a night where nearly every other track in the province threw-in the towel because of the weather, Peterborough Speedway officials managed to dodge the drops to kick-off the first action of the summer – Saturday, June 23rd – as the Can Am TQ Midgets joined the hometown Trent Lakes Complete Plumbing Renegade Truck and Super Stock divisions; along with a 50 lap ‘A’ main for the Jiffy Lube Mini Stocks and the Ontario Modifieds Racing Series at Canada’s Toughest 3rd of a Mile Paved Oval. 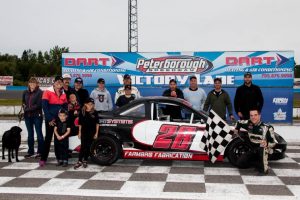 kicked-off the night’s feature race action. From the drop of the green flag, Strutt took control with Kent Missons following him into the runner-up position, while Ryan Oosterholt started gaining spots using the outside line. Strutt – a popular home track veteran – caught the tail-end of the field around the 8th lap, just as a yellow flag waved for an incident in the 4th turn. With the pack back under racing conditions, Ottawa Valley invade Nolan Gould took over the top spot and was lapping cars with less than half the race complete. Gould and Oosterholt were locked in a torrid battle for the lead, when a lap 48 yellow flag necessitated a green, white, checkered finish. The pair ran door-to-door in the 2 lap shootout, with Gould taking the win. Missons, Strutt and Tiffany Vandebelt rounded-out the top 5.  Oosterholt had a pair of Mini Stock heat race wins, with Gould and Strutt splitting the others.

Willow Barberstock and Craig Stevenson paced the Ontario Modifieds Racing Series teams to the Great Canadian RV green flag for their 20 lap main event. Barberstock was strong early, until a caution for issue in the 4th turn bunched the field with 7 laps complete. Anthony DiBello took the lead on the restart, with a pair of former series champions John Baker Jr. and Brad Stevenson on his tail. Stevenson slipped into second spot and mounted a late race charge but couldn’t take away DiBello’s first open wheeled win. Baker Jr., Barberstock and Craig Stevenson completed the top 5. DiBello and Brad Stevenson shared the OMRS preliminary round checkered flags. 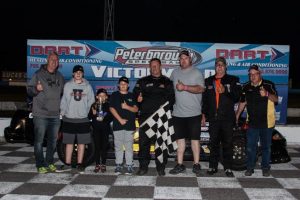 Jessica Pasinetti and Mark Gordon were on the front row as the Super Stocks rolled from the staging area for their main event. Coming to the stripe nearly 20 cars strong, everyone was searching for an early advantage as a multi car wreck brought out the red flag just after the initial start. Gordon took the top spot with 8 laps on the board and survived a pair of mid-race caution flags to take his first win of the year. Rob Richards, Bailey Jacobs, Howie Crowe and Tyler Bouillon followed Gordon across the line. Richards, Fedele DiBello, Kyle Gordon and Tim Burke split the Super Stock heat wins. 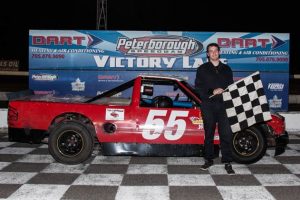 Renegade Trucks hit Canada’s Toughest 3rd of a Mile Paved Oval for their feature tilt. Hennessy got an early jump on the newcomer and even an early race yellow flag couldn’t keep the driver of the #55 machine from his first win of the year. Jeff Dolley was second, with Bill O’Hara, Whittern and Ryan Oosterholt following the lead duo to the checkered flag. Oosterholt and Hennessy each claimed a heat race win.

The Lucas Oil Can Am TQ Midgets made their annual Peterborough Speedway appearance, with Darren Dryden and Adrian Stahle splitting a pair of 20 lap feature events.

All main event finishes are unofficial and subject to scoring review as well post-race technical and safety inspection.

Bullring bullet points: Chris Tubman – last week’s Bone Stock feature event winner – made his Mini Stock debut and finished 9 in the main event…Paul Boundy has added another piece of racing equipment to his Grafton, Ontario stable, with the debut of the #08 Renegade Truck. Mechanical issues kept him out of the feature event…Jeremy McLean made his 2018 Peterborough Speedway debut in the #88 Super Stock.