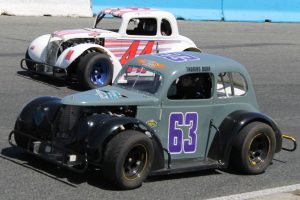 If it hadn’t happened before, the recent success of the Canadian Asphalt Legend Car Nationals has served to put the Trailers Plus Ontario Legends Series on the provincial motorsports map. The prize money, trophy and the honour that accompanies the inaugural title may have taken a trip across the border with Noah Korner after the Saturday, July 14th finale; but fans still saw some excellent competition and the overall success of the event helped build the series’ brand.

“We’ve had a great year with some very strong racing throughout the ranks,” said spokesperson Andrew McFadden, who along with Jeff Drimmie and Kevin Foisy make-up the series team of officials. “The turnout for the Canadian Nationals event gave us a very solid foundation to build on as we move forward throughout the rest of the season. There are some great shows just around the corner and our teams can’t wait to get back on the track.”

Next up for the Trailers Plus Ontario Legends Series is a Saturday, July 28th date at Peterborough Speedway. The venue has been the unofficial home for the tour over the last several years and Peterborough is the home base for the series title sponsor. In addition to the Legends Series, the show will also include the hometown Bone Stock, Mini Stock, Super Stock and Late Model divisions, with racing getting underway at 6:00.

“Many of our drivers have raced at the track known as Canada’s Toughest 3rd of a Mile Paved Oval in different divisions earlier in their careers, so every race we run there is a homecoming of sorts,” McFadden explained. “Taking home a trophy from a show there earns a driver all kinds of bragging rights.”