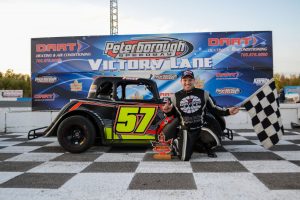 Another exciting season of action for the Trailers Plus Ontario Legends Series has come to an end, with the year’s final checkered flag waving Sunday, October 13th as part of the 27th annual Autumn Colours Classic at Peterborough Speedway.

25 of the best teams in the business rolled from the staging area at the tight, tricky bullring on Mount Pleasant Road with Wes Cuthbertson and recently crowned Lucas Oil Sportsman Cup Series champion Connor James on the front row.

With 40 laps to settle the score, Wes Cuthbertson took an early lead but Miles Tyson wrestled the lead away from Cuthbertson with 6 laps complete, with former series champion Adam Cuthbertson moving into 2nd a lap later. The race’s first and only yellow waved for a 2nd turn issue with 11 laps on the board.

Wes Cuthbertson reclaimed the lead on the restart but his brother took control with 14 complete. Former tour champion Matt Haufe of Stittsville, Ontario made a pass for the lead on lap 16 that was the final swap of the day, as he moved out to a healthy advantage in lapped traffic. Kenny McNicol Jr., Tyson, Parker Traves and James followed Haufe across the line.

Ontario Legends Series notebook: Ontario Legends heat race wins at Autumn Colours went to Kenny McNicol Jr., Wes Cuthbertson, Parker Traves, Adam Cuthbertson, Connor James and Matt Haufe. Jeff Forsey picked-up the checkered flag in the ‘non winners’ trophy dash…Haufe was taking a turn at the controls of Kevin Foisy’s #57 from the Canadian Legend Cars stable. Foisy was on his way to North Carolina for the U.S, Legends Asphalt Nationals – October 17th to 19th – at Carteret County Speedway; along with OLS spokesperson Jeff Drimmie. The pair will be working with Nicholas Ledson, who clinched the 2019 series title, even though he skipped the final event…Cole McFadden – who won a Mini Stock feature at Peterborough very early in his racing career – has been plagued by bad luck since moving to the Legends Series. His #20 machine was parked by tour officials after showing signs of smoke midway through the feature event.