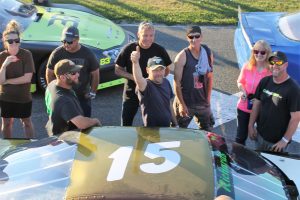 No matter how many different classes are featured at your hometown speedway, each division can have only one track champion. In 2018, Ryan Oosterholt claimed the title in Peterborough Speedway’s Bone Stock, Mini Stock and Renegade Truck fields, while Bailey Jacobs and Dan McHattie earned the crown in the Super Stock and Late Model packs. The 52nd consecutive season of action at the venue known as Canada’s Toughest 3rd of a Mile Paved Oval is still more than 6 months away, but drivers are already thinking about taking their seat at the championship table.

“I’m putting a new body on it and replacing some of the tin work,” said the driver who scored a couple of feature wins during the 2018 campaign. “It’ll probably take a couple of months – give or take before everything is finished – but we’ll be ready to fight for the championship once the new season gets underway.”

A trio of main event wins – including a 50 lap feature – helped pave the way to Nolan Gould’s 2018 runner-up finish in Peterborough Speedway’s Mini Stock standings. With help from former track champion Ryan Babin and the entire Farm Bro team to prep and maintain the car, the 27-year-old expects to return to the tight, tricky bullring on Mount Pleasant Road to take his best shot at next year’s title.

“We’ll be back every Saturday night,” said Gould, who makes the weekly trek from Almonte, Ontario. “There has been some talk about changing the paint scheme on the car and maybe running some invitational events during the nights the Mini Stock class isn’t on Peterborough’s schedule. Our primary focus is having my name engraved on the track championship trophy.”

Finishing second in the 2018 Super Stock standings was a real shot in the arm for Rob Richards. The 38-year-old from Omemee, Ontario says he felt like his #15 machine was close to a first career feature win, but he just couldn’t seal the deal. With a new season on the horizon, he’s looking to climb the next rung on the ladder.

“We’ve averaged a position of 3rd overall for the last 3 seasons. Our existing crate motor program is as stout as ever, but I think we just need something more under the hood to be really competitive,” admitted the driver. “I can’t think of anything else I’d rather do than race at Peterborough Speedway every Saturday night, so I’ll be looking to add some additional sponsorship support during the off-season to work toward achieving that goal.”

The 2018 season wasn’t just Steve Powell’s second year in the Late Model division at the tight, tricky bullring on Mount Pleasant Road. It was his second year of any type of racing. After being named rookie of the year and the most improved driver at the conclusion of the 2017 campaign, Powell claimed the 3rd spot in the final standings during the recently concluded schedule.

“Considering where this team was when we started, finishing 3rd in the points is a big confidence boost,” Steve Powell said. “There are so many great people in every class and I feel like I learned a little more with every turn of the wheel. The 2019 season can’t get here soon enough. We’re all looking forward to getting back to the track.”

Bullring bullet points: Peterborough Speedway’s drivers meeting is scheduled for Sunday, December 9th at 1:00. The event – for all divisions – will be held at the Best Western Otonabee Inn, 84 Landsdowne Street East. 2019 driver registration will be available at a discounted price.