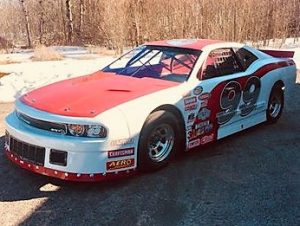 Peterborough Speedway’s 51st consecutive season of action is set to take the green flag Saturday, May 19th. Within a few weeks of clinching the 2017 track championship in the Renegade Truck division, Tim Burke was already making plans for the 2018 season. The 53-year-old speedster from Bancroft, Ontario – whose stock car racing resume already included time at the controls of ACT Late Model, OSCAAR Modified and Lucas Oil Sportsman Cup Series equipment – will make the move to the Super Stock division at the venue known as Canada’s Toughest 3rd of a Mile Paved Oval.

The driver and his crew – made up of his youngest brother Jake, Brian White, along with several family members and friends – spent lot of time during the winter reworking the chassis they purchased late in the year from the #60 team. Burke says they could’ve raced the car as it was – like they did at the Autumn Colours Classic – but wanted to put their own identity on the ride.

“The car hard had been immaculately prepared and expertly maintained when it arrived at our shop. It was almost a shame to take it apart,” Tim Burke said. “Throughout my career, running Mopar equipment has been one of my trademarks, so the team was really excited about putting a Dodge Challenger body kit on the car. It took a while to get everything situated exactly the way we wanted, but I’m happy with the way things turned-out and think it’ll turn some heads on the track.”

Again this year, the #99 team will head into battle with sponsorship support from Lynval Contracting, where Burke works as a heavy equipment and truck mechanic/operator. They will also utilize the media and promotional services of Clarke Motorsports Communications during the season.

Tim Burke has been racing cars and trucks of one kind or another since 1983 and has a number of highlights during his lengthy career, including an Ontario 4-by-4 championship and a 2nd place Late Model point championship finish in 2009. At times, he thinks he might be too old to follow what can sometimes become a gruelling weekly racing program, but that attitude quickly disappears once the green flag waves.

“Its hard to remember everything that has happened at every track over the years,” Burke admitted. “There have been lots of wins and great finishes. Last year’s truck division track championship at Peterborough was a definite high-water mark. Overall, I’m pretty happy with my career so far and hope to do well with the Super Stock program in 2018.”

Potential marketing partners interested in being part of the #99 Super Stock team for their inaugural Peterborough Speedway season can contact the driver, timburke99x@gmail.com.