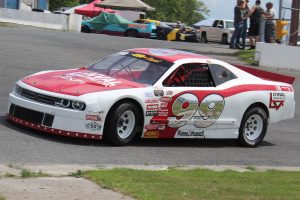 Turn back the clock to opening night; the time of year when drivers in every class had dreams of a track championship. As the schedule wore on, some dropped out of the hunt, while others kept their dog in the fight. With the 2019 regular season in the homestretch, Bancroft’s Tim Burke is ready to mount an all-out charge for his inaugural Peterborough Speedway Super Stock title.

With a diverse resume that includes experience in an American-Canadian Tour Late Model, the Lucas Oil Sportsman Cup Series and OSCAAR Modified divisions and the 2016 Peterborough Speedway Renegade Truck championship, Burke and his team are committed to putting everything they have into capturing the crown. With the Super Stock class slated to be part of 4 of the remaining 5 events on calendar, Tim Burke says this is the perfect time for his #99 crew to get hot.

“Some of the changes in the new rules package threw us a curve and that led to a slow start to our season at Peterborough,” said the driver. “We’ve been getting better week-after-week and the effort we’re putting into some of the changes we make on the car is starting to pay off. It finally feels consistent and that’s showing in our runs. It would’ve been nice to have a feature win by this point, but the top 5 and top 10 finishes we’ve been able to log and that’s kept us in the hunt.”

In addition to his performance on the familiar layout of the tight, tricky bullring on Mount Pleasant Road, Burke and the team also took their show on the road Saturday, June 22nd for another start at Jukasa Motor Speedway. Having been there only once before, the talented wheelman needed to go over his notes to come up with a set-up for the much bigger and faster Southwestern Ontario speed-plant. While he had hoped for a better result at the end of the day, it was still a strong learning experience.

“Looking at the big picture, the trip was good. We picked-up some information on what will work for when we head back there for the Saugeen Shores Transmission event – Sunday, September 1st – paying $5000 to win.” Burke admitted. “Even though we lost a cylinder 8 laps into the race, we still managed to finish on the lead lap. It was a little disappointing, but you have to take what the car will give you.”

Tim Burke would like to thank his family, friends, fans and crew members for their contributions to the team throughout his career. For the 2019 season, the #99 Super Stock program is proudly supported by Lynval Contracting, Robbie’s Hobbies, Bayside Automotive, Howard Race Engines and Clarke Motorsports Communications.