Feature race action for the night got underway with a 20 lapper for the Battlefield Equipment Rental 4Fun teams, as Tiffany Vanderbelt and Brandon Feeney paced the pack to the Great Canadian RV green flag. Before the first lap had been completed, Ryan Oosterholt moved into the top spot and wasn’t challenged for the duration of the event. Even a yellow flag for a lap 13 incident between Cody Fenton and Criss Tuck couldn’t slow the charge to his second win of the year. Jeremy Kelly, Sean Kennedy, Ray Schroer and Doug Wills chased the driver of the #79 across the stripe.

Bailey Jacobs and Rob Richards brought the Paul Davis Systems Thunder Car drivers from the staging area for their ‘A’ main, with 20 laps to settle

the issue. Early contact between Fedele DiBello and Dan Archibald slowed the pace and by the time there were 4 laps complete, veteran Steve Mayhew was in charge of the field. He was challenged high and low by Archibald and Anthony DiBello with 9 down and DiBello took the spot with 14 circuits on the board and held on for his 3rd feature win of the year. Archibald, Mayhew, Jacobs and Richards completed the top 5.

With Mark Gordon and Jack Horner leading the way, the Earl Ireland Auto Sales Late Model runners took to the track for their 25 lap shootout.

Coming to the stripe to log the first lap, Dave Morgan and Cole McFadden made contact. After a quick pit stop, Morgan continued while McFadden’s ride was through for the night. Former OSCAAR Super Late Model runner Al Shepstone took the lead with 3-wide pass on the backstretch and would never give up the spot. Tyler Betts, Gordon, Morgan and Horner chased the winner to the line.

Action wrapped-up for the night with 25 laps of INEX Ontario Legends Series excitement. Cole Ledson and Kevin Foisy brought the field to the green flag. Even though it took 3 attempts to get the race underway, the Legends put a strong show on the track. A late race yellow put Foisy and Nicholas Ledson on the front row with 19 laps complete. Heading through the first and second turns, the pair made contact. Both cars were to be sent to the back of the field, but Ledson was unable to continue. After a 6 lap shootout, Brian Saunders picked-up his second win of the year. Cole Ledson was second, with Jacob Sheridan 3rd. Foisy rebounded to finish 4th, just ahead of Jamie Riberdy. 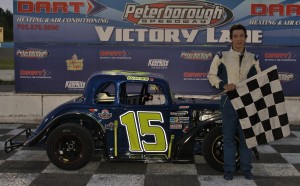 Bullring bullet points: Dan Archibald make his second Peterborough Speedway start of the year in the Thunder Car ranks. Bradley Robinson took his first career green flag in the same division. Doug Wills took a turn behind the wheel of the #64 4Fun machine, filling-in for Gary Fallis…After winning the event last week, Matthew VanDerBelt was the first car to retire from this week’s 4Fun division feature…Kyle Donaldson took a turn at the controls of Howie Crowe’s #28 Thunder Car…In a special Father’s Day draw, Ronald Sayeau won a Peterborough Speedway fan package, including a race night in one of the track’s tower suites.

Fans can always find the latest news at www.peterboroughspeedway.com  or by liking the track on Facebook or following it on Twitter.  You can also download the free Peterborough Speedway app on your Smartphone.