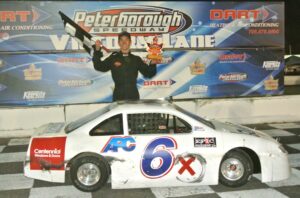 There was a chill in the air and plenty of hot action on the track at Canada’s Toughest 3rd Mile Oval as the 29th edition of the Lucas Oil Autumn Colours Classic entered its 2nd day at Peterborough Speedway.

With the No. 6x of Will Quarrie and Jakeb Spencer-Walt in the No. 31 on the front row, the Kingsway Auto Centre Junior Late Model squad came to the line 15 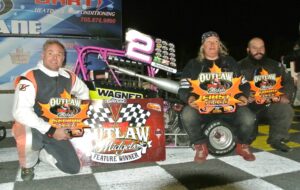 starters strong for their first Autumn Colours Classic feature tilt. Quarrie took the lead early but surrendered the top spot to Spencer-Walt with only a trio of laps complete. With battles being waged all around the track, the lead duo was slicing through the backmarkers at a torrid pace. With only a couple of caution flags to slow the pace, the 15-lap race distance rolled by in the blink of an eye. Even though they swapped the lead back and forth several times over the late stages, Quarrie took the win over Spencer-Walt, with Keegan Moat, Wyatt Sprung and Lucas Finnegan rounding-out the top 5.

The Trailers Plus Canadian Legend Car Series hit the track for the first of their 2 weekend feature events. Josh Inglis and Cole McFadden brought the 19 car starting pack to the green flag. McFadden took control of the 30 lapper like he’d been shot from a cannon. The Woodville, Ontario native – who destroyed a brand new car in pre-season testing – held off challenges from Jordan Latimer, Dawson Drimmie and Adam Cuthbertson – to name a few – in claiming the win. Cuthbertson finished in the runner-up spot, with Hudson Nagy, Latimer and Drimmie completing the fast 5 at the checkered flag. 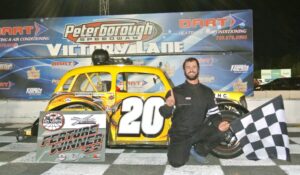 Starting deep in the field, Jessica James came into the final Outlaw Midget Series event of the year with a 90-point cushion on her nearest championship rival. Rob McCall and Rob Harrison brought the starting field of close to 15 cars to the green flag. With a plan in mind, the driver of the No. 2 machine wasted little time in charging to the front of the field and was running 2nd with only 4 laps complete. She grabbed the lead following a lap 6 restart wasn’t challenged the rest of the way. Her latest main event win also served to clinch the tour title for the popular runner. Mike Bradley, Russ Couture, Dave Bradley and Harrison completed the top 5.

This year’s edition of the Super Bowl of Stock Car racing concludes Sunday, October 9th with a day of feature race action, starting with a 50 lapper for the OSCAAR Modifieds. Grandstands open at 11:30, with the first green flag at 12:30. See www.peterboroughspeedway.com or the track’s Facebook, Twitter and Instagram social media platforms for the latest Autumn Colours Classic news and information.