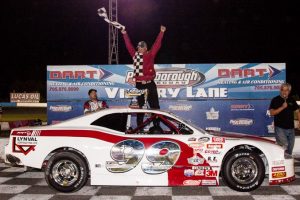 Close to a dozen OMRS teams came to the line to kick-off feature race action, with Randy Hollingsworth 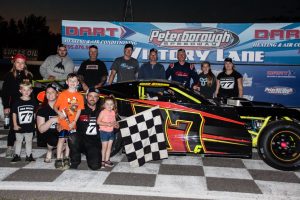 and Rob Warnes on the front row for the 20 lap affair. Warnes grabbed an early lead from his starting spot on the outside of the front row, with Chad Strawn slipping into the runner-up spot. Strawn took the lead with 3 circuits showing on the scoreboard, as open wheeled newcomer and former Peterborough Speedway Thunder Car/Super Stock champion Anthony DiBello challenged the leader. As the pack caught the tail-end of the field, Strawn pulled away to a bigger advantage and scored the win in the first OMRS win of the year. DiBello held-on for second over Rick Warnes, Rob Warnes and Hollingsworth. 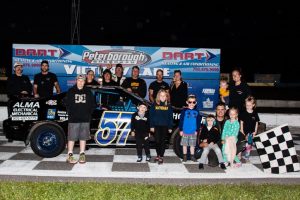 the way. Solomon had control of the event early, but former class champion Ryan Oosterholt was closing fast. As the field started to put slower cars a lap down around the halfway mark, Oosterholt was hot on the leader’s tail and took the spot away with 14 laps complete. The caution-free event saw some excellent battles throughout the running order, with Oosterholt taking the checkered flag. Reigning track champion Jeremy Kelly, Malcolm MacDonald and Chris Tubman completed the top 5. 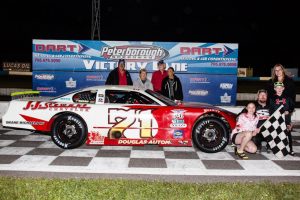 30 laps would settle the score as Derek Lynch and Amanda Balson brought a power pack of Late Model runners to the Great Canadian RV green flag. Lynch – whose family has been a track fixture since the Westgate Speedway era – took the lead, with Dan McHattie glued to his back bumper. After several attempts, the former Autumn Colours winner and Peterborough track champion worked around Lynch, who was caught in the outside line and dropped to 5th. McHattie took his first win of the year over Amanda Balson, Chris Mitchell, James Horner and Mike Wallace.

McHattie had a pair of Late Model heat wins, with the others going to Mark Gordon and Amanda Balson. 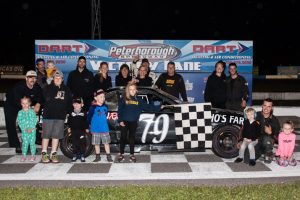 of 15 Jiffy Lube Mini Stockers came to the stripe for their 20 lap feature tilt. Ryan Oosterholt – who has been doing some ride-hopping so far this year – took the lead with only 2 laps complete. Like their Bone Stock brethren, the Minis also ran the entire race distance without a yellow flag, as Oosterholt grabbed his second win of the year. Babin, Strutt, Ember Junkin and Kent Missons completed the top 5.

With a guaranteed starting spot for the Canadian Short Track Nationals at Jukasa Motor Speedway up for grabs, Sean Walker and Tim Burke paced a pack of 23 Super Stock teams to the green flag to wrap-up the 2nd week of action on Peterborough Speedway’s 2018 schedule. Burke took an early lead, with Bailey Jacobs moving into second with just 5 laps on the scoreboard. The yellow flag flew often, as drivers struggled to find their rhythm in the highly competitive field. Challenges would come and go, but Tim Burke would never give up the top spot. Bailey Jacobs followed the #99 machine across the line, with Howie Crowe, Marlie Owen and Fedele DiBello rounding-out the top 5.

All main event finishes are unofficial and subject to post-race technical and safety inspection and scoring review.

Bullring bullet points: Former Mini Stock track champion Ryan Babin came out of semi-retirement and drove a couple of different cars during the night, finishing 2nd in Nolan Gould’s #28 Mini Stock and 12th in Rob Crick’s #11 Bone Stock…The Super Stock field was bolstered by some invaders who wanted a shot at the preferred starting spot for the Jukasa event, with Dan Archibald, Paul Bogensberger and Jeremy Gerrow signing-in pit-side.

Action continues Saturday, June 16th with the return of the 100 lap APC Pro Late Model Series, along with the home track Battlefield Equipment Rental Bone Stock and Trent Lakes Complete Plumbing Renegade Truck divisions; plus the Trailers Plus Eastern Ontario Legends. Pit gates open at noon, with the spectator grandstands unlocked at 3:00 and racing at 5:00.

Head to www.peterboroughspeedway.com, as well as the track’s Facebook and Twitter profiles for the latest news and schedule information. Fans can also find the free Peterborough Speedway Smartphone app.