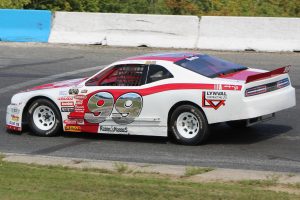 Ask any local racer and they’ll likely tell you their involvement in the sport is a passion. It’s their weekly softball or golf game; how they relax and release the tensions of the day. Tim Burke is no exception to the rule. The 55-year-old from Bancroft, Ontario has experienced several different racing classes throughout his career and has the 2017 track championship and a 2nd place in 2015 from Peterborough Speedway Renegade Truck and a 2009 Late Model 2nd place run to show for his efforts. Along the way, the heavy equipment operator/mechanic has also spent time at the controls of ACT Late Model, OSCAAR Modified and Sportsman Cup equipment. He finished 3rd in the final 2019 KOD Disposal Super Stock standings at Peterborough.

Like others who have come before him and more that will certainly follow, Burke doesn’t race for the money. Along the way, he’s probably spent far more cash on his racing equipment than he’ll ever earn. Late hours in the shop and the lengthy road trips to get to the next event on the schedule can take their toll over the years but those who are deeply committed to the sport keep coming back in search of the next checkered flag. Burke says he’s anxious to climb back behind the wheel of his #99 Dodge Challenger.

“I can only speak for myself, but with everything that’s been going on in the world this year, I just want to race,” Tim Burke explained. “Usually we’d be close to wrapping-up the season by now, but some of us are just getting started.”

Short track racing is a labour of love and Saturday, September 5th – during the Labour Day Weekend – Burke will pull a page from his racing past as he hauls to the venerable Flamboro Speedway near Hamilton, Ontario for the Grisdale 100, an Ontario Sportsman Series date, that also includes a group of provincial Super Stock racers from several different tracks across the region. Drivers will be required to run the tour’s spec American Racer tires, but the veteran speedster says he doesn’t think a change in rubber will make a substantial difference in his car’s performance.

“We’ve run American Racer tires at Peterborough for the last few seasons so my team is familiar with how they perform. I’m not sure about the characteristics of the tire we’ll be using, but every car in the field will be on the same compound,” Tim Burke said. “I haven’t made an Ontario Sportsman Series start since 2011, with a career best finish of 5th but we’ll be looking forward to a great run and hoping to log a solid finish once the checkered flag waves.”

Tim Burke’s #99 Dodge Challenger SRT is proudly supported by Lynval Contracting, Robbie’s Hobbies, Bayside Automotive, Howard Race Engines, Scott Shocks and Clarke Motorsports Communications. Fans can find more details about the event by visiting www.flamborospeedway.ca or Flamboro Speedway-Authorized Page on Facebook. The race will be recorded by Pedal Power 51 and broadcast on You Tube the following day, as well as being shared on the Flamboro Speedway Facebook page.