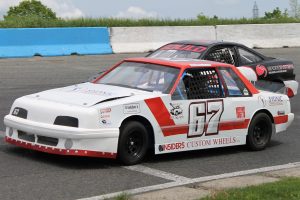 In baseball, the rule is 3 strikes and you’re out. When it came to the 2018 season opening event at Peterborough Speedway, Mother Nature was called out after only a couple of strikes. Following rainouts Saturday, May 19th and Saturday, May 26th, track officials have decided to move to the next event on the calendar and will host the year’s first Summer Toonie Night – presented by Pepsi – with $2.00 spectator grandstand admission Saturday, June 2nd. Track owner/promoter J.P. Josiasse says they gave the annual lid-lifter their best shot, but the weather forecast just wouldn’t cooperate.

“We tried everything we could to give the fans a special night to kick-off the year, but things just didn’t work out,” Josiasse said. “On the first attempt, we knew early-on that it wasn’t going to work out, but for the second try we were a bit more optimistic. There was a chance of showers, but signs pointed to a large window of opportunity to get the show in the books. Teams got a chance to get on the track and run some practice laps before the skies opened-up. It was very disappointing for everyone.”

Action returns to the venue known as Canada’s Toughest 3rd of a Mile Paved Oval Saturday, June 2nd with the year’s first Summer Toonie Night, presented by Pepsi. Spectator grandstand admission will be just $2.00, with the home track Battlefield Equipment Rental Bone Stock, Jiffy Lube Mini Stock, Trent Lakes Complete Plumbing Renegade Truck divisions and a 50 lap main event for the Late Model teams. Also on the show will be the Trailers Plus Ontario Legends and a fan appreciation autograph session at intermission. Pit gates open at 1:30, with the spectator grandstands unlocked at 4:00 and the night’s first green flag at 5:00.

Looking ahead on the schedule to Saturday, June 9th finds a Super Stock qualifier for the $5,000 to win Canadian Short Track Nationals – Sunday, September 2nd – at Jukasa Motor Speedway. Action will also the Bone Stock, Mini Stock and Late Model classes, along with the Ontario Modifieds Racing Series. Pit gates will open at 2:30, with spectator admission at 5:00 and racing starting at 6:00.

Fans can find the latest news, information, race results and driver profiles throughout the season by visiting www.peterboroughspeedway.com, liking the track on Facebook or following it on Twitter. There is also a free Smartphone app available.