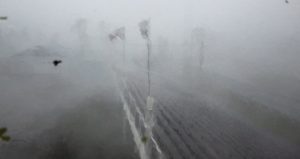 What was scheduled to be the 2022 season opener at Peterborough Speedway has been postponed because of gale-force winds and driving rain that caused extensive damage to the speedway grounds, buildings and fixtures across the property. Track owner and promoter J.P. Josiasse says track officials had no other choice than to delay the Pure Country 105 Opening Night to a new date they hope to announce shortly.

“Teams had signed-in at the pit gate and drivers were taking their equipment through the Kenny U-Pull Tech Lane when the winds started picking-up and the skies to the west of the track darkened,” explained Josiasse. “A storm warning had been posted by Environment Canada and shortly after losing power at the facility, the front blew in sending everyone on the property looking for shelter.”

While they will be kept busy checking the property for damage caused by the storm and making necessary repairs, track officials are hoping to confirm anticipated plans to move the weather-delayed program from Saturday, May 21st to as soon as Saturday, May 28th. Anyone who has an event wristband from the original date is asked to retain it and it will be honoured when the make-up date is officially announced.

“Storm damage and power outages were extensive and wide-spread, affecting areas all around the speedway,” said Josiasse. “We’ll be faced with the task of repairing or replacing some of the external fencing around the property and the pit area. There was also damage to one of the pit buildings and some roofing in different areas of the track. As quickly as the storm – which is now believed to have been a microburst – blew in, we’re very fortunate that no one was injured.”

With the immediate focus on making necessary repairs to guarantee the health and safety of anyone entering the property, fans can stay connected with www.peterboroughspeedway.com as well as the track’s Facebook, Twitter and Instagram social media profiles for additional details and information about the anticipated rescheduled season opener.