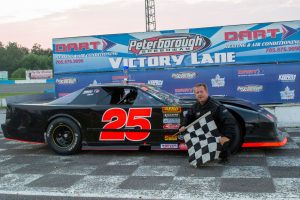 A 20 lap KOD Disposal Super Stock feature opened the night’s main events, with Tyler Betts – in Howie Crowe’s #28 machine – and Mark Gordon on the front row. The lead duo ran side-by-side for a handful of laps, before the front row starters swapped positions. Karting grads Tyler Bouillon and Marlie Owen waged their own battle, while trying to hold-off last week’s winner Dan Archibald. Slower cars came into play and likely led to the event’s only yellow flag, with 18 laps complete. Gordon kept Betts at bay for the win, with Tim Burke, Owen and Bouillon completing the top 5.

Brad Lavalle and Rob Crick brought the Battlefield Equipment Rental Bone Stock field to the Great Canadian RV green flag. Several different runners were trying the outside line, with varying levels of success as the pack caught the tail-end of the field with 13 laps showing on the scoreboard. The track’s entry level division delivers some of the best racing on the track and this night was no exception, as reigning track champion Ryan Oosterholt took the win in the caution-free feature. Brad Lavalle, Steve Finnegan, Corey Strawn and Chris Tubman rounded-out the top 5. 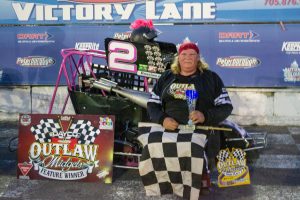 The Outlaw Midgets rolled to the line with a solid starting field that saw Wayne McKibbon and Richard Woodland on the front row. Woodland jumped-out to an early lead, with Jessica James – who had started in 6th spot – moving into the runner-up position. A yellow flag – for a second turn incident with 4 laps complete – brought the pack back together and opened the door for James to grab the lead on the 6th lap. Adam Carrothers moved into the top 3 before the 25 lapper reached the halfway mark and the field had caught the back of the pack with 13 laps complete. After building-up a lead of more than half a straightaway, James held on for the win over Carrothers and Robin McLean. Full event results can be found at www.outlawmidgets.ca. 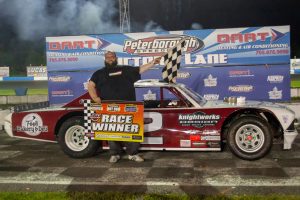 Peterborough Transport – hit the tight, tricky bullring on Mount Pleasant Road, with Bob Parsons and Brandon Robertson on the front row. Defending series champion Tyler Hawn – who started inside the 2nd row – took the lead early and held the spot through a pair of early yellows. Hawn and the rest of the pack caught the backmarkers with 17 of the race’s 35 lap distance complete, before the pace was slowed again for 2 more cautions. The sharp looking #2 machine was the class of the field, as Hawn took the win over Steve Book, Rodney Rutherford, Adrian Foster and Donny Beatty. Fans can follow the OSCAAR Hot Rod division throughout the season at www.oscaar.ca. 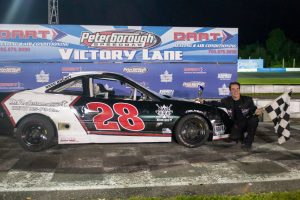 Melissa Bullen and Gil Brooks brought the Jiffy Lube Mini Stocks from the staging area for the night’s final main event. Brooks took the lead early, with the top 10 cars in the field running a high-speed parade lap through the race’s early stages. Kent Missons grabbed the top spot with a little more than a handful of laps on the board, with a hard-charging Nolan Gould taking the runner-up position. With the 20 lap tilt slowed by just a pair of cautions, fans saw an amazing show that was culminated by Gould’s last lap pass for the win. Missons, James Townsend, Ember Junkin and Jeremy Kelly were next across the stripe.

All finishing positions are unofficial and subject to scoring review and post race inspection.

Bullring bullet points: In the Millbrook Lions Club 50/50 draw, Paul Kuleba of Ajax, Ontario walked away with a prize worth close to $1100.00…A brief thunderstorm rolled through the area about 45 minutes before the main gates were scheduled to open. Luckily, it was over almost as quickly as it began and only caused a delay of about 15 minutes in the practice schedule…The game of racing musical chairs continued Saturday night. In addition to Donny Beatty in the #88 OSCAAR Hot Rod and Tyler Betts steering Howie Crowe’s Super Stock, Tyler Junkin wheeled the #42x Mini Stock of Erin Kearns…Outlaw Midget driver Nigel Buttivant had a scary flip on the backstretch. The driver was reported to be okay, but series officials encouraged him to get checked-out at the hospital…Steve Book used the kindness of strangers to lead to his 2nd place OSCAAR Hot Rod finish. The transmission in his #47 machine was replaced before the feature.

Next on the calendar at the tight, tricky bullring on Mount Pleasant Road is the Mid Season Bash, presented by Country 105. Race action includes the home track Bone Stock, Renegade Truck, Super Stock and Late Model divisions; along with the Ontario Modifieds Racing Series and timed spectator laps with King of the Hill. Pit gates open at 2:30, with the general admission grandstands unlocked at 5:00 and racing at 6:00.

Look to www.peterboroughspeedway.com or the track’s Facebook or Twitter social media platforms for details on the 2019 schedule. Search for ‘Peterborough Speedway’ where you find your smartphone apps and take the track with you everywhere this season.