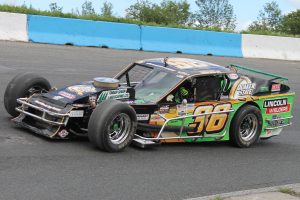 Ask even a casual stock car racing fan about the driver who made the number 43 famous and almost everyone will answer ‘Richard Petty’. Even though he lost his life in a crash at the Daytona 500 in 2001, Dale Earnhardt will be forever linked to the black #3 car and for many, Jeff Gordon will always be known as the driver of the #24. At every level of the sport, racing is all about numbers. They help fans identify their favourite drivers and let raceway officials track position during an event.

With Peterborough Speedway’s 25th edition of the Autumn Colours Classic – presented by Lucas Oil Products – less than a month away, the motorsports number game is ready to take on an entirely different meaning. Taking the checkered flag in Ontario’s premier auto racing event is such a coveted achievement, several drivers are expected to run a number of different classes, while some teams will file multiple entries in search of the big prize.

Gary Elliott – the self-proclaimed ‘Canadian Ironman’ – is looking forward to the Autumn Colours Classic. The event will not only be his 25th of the year, if everything goes according to plan, it will also be his 800th consecutive race for the Dundas, Ontario veteran in a career that began in 1987. Elliott says his current plan is to run with the OSCAAR Modified division, but he hasn’t ruled-out bringing his Late Model along as well and running a pair of different classes, as he has done in the past.

Former track champion and ACC winner Ryan Kimball also has plans to climb behind the wheel of multiple entries. The Norwood, Ontario racer – who started on the pole with at New Hampshire Motor Speedway with an American-Canadian Tour machine – has confirmed plans to contend for his next Autumn Colours Classic in the Organics & Glass Late Model field, as well as an OSCAAR Super Late Model.

“If past seasons are any indication, there will several duplicate car numbers through the different divisions,” said Peterborough Speedway owner and promoter J.P. Josiasse. “These teams are familiar with the process and will readily add an ‘X’ or some other letter to their car to help the scorers and eliminate any confusion.”

The 25th edition of the Autumn Colours Classic – presented by Lucas Oil Products – is scheduled for Friday, Saturday and Sunday – October 6th through the 8th – at Peterborough Speedway. The first day’s activities include technical inspection and practice rounds, along with the first round of qualifying for the Battlefield Equipment Rental 4Fun, Jiffy Lube Mini Stock, Thunder Cars, Organics & Glass Late Model, Pro Late Model and OSCAAR Modified divisions. Young Guns Races – sponsored by APC Auto Parts – for the Mini Stock and Thunder Car classes are also part of the opening night race card.

Pit gates open at 10:00, with the spectator grandstands unlocked at 5:00 and racing starting at 6:00. Full schedule details are available by checking www.peterboroughspeedway.com as well as the track’s Facebook page and Twitter feed. Fans can also download the free Peterborough Speedway app for their Smartphone.