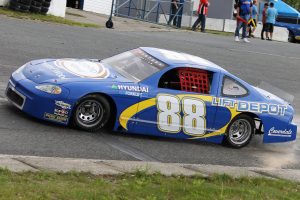 Canada’s Toughest 3rd of a Mile Paved Oval is hosting some big events during its 50th Anniversary Season and Saturday, August 12th, one of the biggest to grace the popular Central Ontario raceway comes to town, as the Lucas Oil Sportsman Cup and Ontario Pro Challenge Series make a stop at Peterborough Speedway. Also on the program will be the home track Battlefield Equipment Rental 4Fun, Jiffy Lube Mini Stock and Organics & Glass Late Model divisions.

Former Peterborough Speedway Mini Stock regular Brandt Graham brings a triple threat to the tight, tricky bulling on Mount Pleasant Road, west of the Liftlock City this weekend. Not only is the 19 year-old from Orono, Ontario the reigning series champion, but he is also the defending race winner and the current point leader on this year’s tour. Fans can also expect to see Connor James – who recently picked-up his first career Ontario Modifieds Racing Series feature win – in the Lucas Oil Sportsman Cup starting line-up for the second time of the 2017 season.

After returning to the schedule last season, the Ontario Pro Challenge teams will be back for the second of 2 events on Saturday night. It will be the 9th show of the year for the tour that offers full-sized action in ¾ scale stock cars. Tim Norris has held the hot hand on this year’s schedule and picked-up the main event when the series first visited Peterborough on Saturday, May 27th.

For the Saturday, August 12th event at Canada’s Toughest 3rd of a Mile Paved Oval, pit gates will open at 2:00, with the spectator grandstands unlocked at 5:00 and the night’s first Great Canadian RV green flag set to fly at 6:00.

Full 50th Anniversary schedule details and the latest news can always be found by logging onto www.peterboroughspeedway.com, by liking the Peterborough Speedway Facebook page or following the track on Twitter. Fans can also download the free app on their Smartphone.