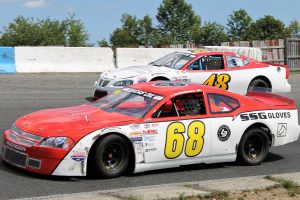 Anticipation continues to build as motorsports fans look forward to the 52nd consecutive schedule of action at Peterborough Speedway. The tight, tricky bullring on Mount Pleasant Road is Central Ontario’s Saturday night site for short track racing excitement. Once again this year, several touring series will join the home track fan favourites for another season. Track owner and promoter J.P. Josiasse says its part of the commitment to give the crowds what they want.

“We hear from people through our social media platforms and talk to the fans at the pre-season events we’re part of,” Josiasse said. “The crowds who come through the main gates week-after-week help our promotional team put together a winning schedule. Our regular runners are some of the best in the business and adding the travelling series to the mix provides some extra pieces for the puzzle.”

Peterborough Speedway puts out the welcome mat for special guests right off the bat; starting with the first of this year’s 7 events for the Trailers Plus Eastern Ontario Legends to kick-off the 2019 season on Saturday, May 18th. A week after this year’s Country 105 opener, the Ontario Modifieds, OSCAAR Pro Sprints and Ontario Pro Challenge Series will make their debut. OMRS has 6 dates on the schedule at the venue known as Canada’s Toughest 3rd of a Mile Paved Oval, while Pro Sprint and Pro Challenge teams will be part of a pair of shows.

“In addition to their regular season appearances, all 3 OSCAAR divisions will be part of the 27th annual running of the Autumn Colours Classic on Thanksgiving weekend,” said J.P. Josiasse. “The Trailers Plus Eastern Ontario Legends Series will also crown its 2019 tour champion during our year-end spectacular.”

The complete track schedule will be released during the Motorama Custom Car and Motorsports Expo – March 8th to 10th – at the International Centre in Toronto. Fans can find the latest off-season headlines and information by visiting www.peterboroughspeedway.com or checking the track’s Facebook and Twitter social media platforms.